Teaching children how to navigate conflict 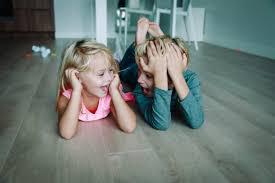 My preschool-age twin boys and I were wearing masks recently as we exited a beach-access stairway. One of my sons asked a stranger walking ahead of us: “Why aren’t you wearing a mask? You’re going to make us sick!”

On our way to the car, a couple, who weren’t wearing masks, gawked at us and made comments to each other. I quickened my pace and ushered the kids into the car.

Later, I realized that I’d missed an opportunity — not to have a debate with strangers, but to help my children make sense of the situation. I had only shared my viewpoints on the situations we’ve faced during the coronavirus pandemic. I hadn’t told them about the other viewpoints that exist or explained why people might think that way.

When we only see one side, it creates an “us vs. them” mentality. In reality, there are multiple sides and — no matter where you stand on the issues — everyone is trying to tread water. Pushing each other under for thinking differently only causes us all to drown.

What if we used this as an opportunity to show our children we can navigate rough waters with love — and taught them to do the same?

Empower your children to take ownership of their emotions

“Who knows best how you feel?”

This is a question Tamar Kahane, a licensed clinical child and adolescence psychologist and founder and director of the Kahane Center in New Jersey, often asks when she first meets with a child. They often don’t know how to answer. They’ll say “my mom” or “my dad.” Maybe “my best friend.” After a few guesses, children will sometimes look at Kahane and say, “Oh, you!” She’ll smile and say, “No, not me. I just met you; how could I possibly know best how you feel?”

“Sometimes, they’ll eventually come to recognizing that it’s them, but other times they don’t, and when I say, ‘I think you know best how you feel,’ they light up,” Kahane says.

Acknowledging our children’s emotions and encouraging them to express them is a powerful approach to conflict. Let’s say that your children are arguing over a desired object. At my house, which child gets a particular Lego figurine is as heated a debate as which political candidate should win the presidential election.

A parent feeling overwhelmed might respond, “Who had the Lego first? Give it back and stop fighting. Enough!” It happens, Kahane says, but if we want to use it as a teaching opportunity, we might try another approach.

She suggests: “Are you angry at your brother because he grabbed it from you and you want it back? Okay, why don’t you tell him? Tell him, ‘I’m angry that you grabbed it from me. Please give it back.’” The other child might claim having the toy first. The parent can acknowledge the problem without taking sides, asking: “Anybody have an idea of how we’re going to work this out?”

Younger children might need options at first, such as turn-taking or both children going together to find a second, similar object, suggests Greg Baer, creator of the Real Love parenting program, which specializes in conflict resolution. Older children or teens might come up with their own creative solution — after you leave the room.

“You don’t teach them how to resolve individual conflicts,” says Baer. “That becomes a legal library. Instead, you teach them it’s the feeling they want of being happy. That’s how you get them to conflict resolution. How do you want to feel?” Universally, Baer observes, people want to feel unconditionally loved and happy.

Give your children tools they can access in conflict

Think back to the last time you and your child were in conflict. We all know the scene. Maybe your child is kicking and screaming on the floor or your teen shouted something hurtful and slammed a door. Now, go up to them and suggest they take three calm breaths when they’ve never practiced that before.

How did that go?

If it’s anything like my experience, not so hot.

“Whatever skill it is, it needs to be practiced and learned and overlearned, not when the child is in the midst of a crisis,” Kahane says. If it’s breathing to calm down, that’s great, she adds, but find a way to make it part of their daily routine so they can access it when they need it.

For example, practice taking a few deep breaths together before your child or teen starts virtual learning or homework each day.

For anger, your child might need a tool with more physicality. “When I worked with a play therapist, we had bean bag chairs in the room,” says Donna Wexler, a pediatric speech-language pathologist and owner of Let’s Communicate, a private practice in Florida where she works with children, teens and adults with social-language challenges. “We told them, ‘If you’re feeling angry, first, say you’re angry, and then go over and punch the bean bag chars.’” They made it very clear people are not for hitting. You might suggest your child run laps around the yard and ask how they feel after, Wexler says.

Other options, Kahane offers, include playing with clay or taking a hot shower.

If you integrate coping mechanisms into your child’s daily life, they’ll have them handy in conflict — even when you’re not there.

My husband and I also teach our children that they always have the option to ask for help. In those times, I’ll practice one of their tools with them, sit by them or give them a tight hug to reassure them that, even in conflict, they are loved.

Listen to understand, not to respond

In conflict, we’re often listening to formulate our response. To avoid this tendency, Wexler uses role-play — assigning one person the role of “talker” and the other as “listener” and then switching. If you have younger children, you might facilitate this by making a “talking stick” that gets passed around the dinner table. It teaches children the natural give and take of a conversation, which helps in conflict.

Baer uses this example: Your child might say, “I hate school” or “I hate my teacher.” As a parent, you might respond, “No, you don’t. We don’t use the word ‘hate.’” That doesn’t address what your child said, but rather the piece of what they said that you didn’t like.

A response that models listening, Baer says, might be: “Of course you do. There are a lot of things about school that you wouldn’t like. Tell me about one of them.” Now, the child feels heard and might be willing to tell you what’s really going on: They’re being bullied at school or they feel isolated from friends while distance-learning.

“Once you feel like I’ve really heard you, you feel cared about,” Baer said. “Now, we can resolve a conflict.”

To grow into loving listeners — who are willing to hear different perspectives — our children have to feel heard and loved themselves. It starts at home by how we model conflict.

We’re not always going to get it right. If you feel angry with your children or partner during a conflict, Baer suggests saying, “I’ll be back in a minute.” Use the tools at your disposal — talk to a friend, breathe deeply, do push-ups, take a hot shower. During the pandemic, my husband and I also offer to take over with the kids when we see the other person nearing their threshold — or we’ll ask for help ourselves.

What happens if we’ve already lost our cool? Mistakes are part of learning, and that’s a gift we can give our children by apologizing, Kahane says. Try: “I’m sorry that I yelled. I made a mistake. I love you very much.”

Modeling healthy conflict also extends to the way we talk to (and talk about) people with opposing views: family, neighbors, friends on social media and — yes — even strangers on a public stairway. It can also mean debriefing our children after a conflict: “This person might think this way for this reason. Here’s what I believe and why. What do you think?” Right now, our children are watching how we handle conflict. It’s important that they also see how we resolve it, which won’t always be to come to a consensus. We might simply agree to disagree, with love.