The Effects of Theatre Education on Children 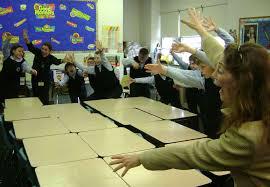 A 2005 Harris Poll revealed that 93% of the public believes that arts, including theatre, are vital to a well-rounded education

Drama can improve skills and academic performance in children and youth with learning disabilities?

DRAMA IMPROVES ACADEMIC PERFORMANCE
Numerous studies have demonstrated a correlation between drama involvement and academic achievement. In addition to having higher standardized test scores than their peers who do not experience the arts, student who participate in drama often experience improved reading comprehension, maintain better attendance records, and stay generally more engaged in school than their non-arts counterparts. Schools with arts-integrated programs, even in low-income areas, report high academic achievement.

DRAMA STUDENTS OUTPERFORM NON-ARTS PEERS ON SAT TESTS
The College Entrance Examination Board reported student scores from 2001, 2002, 2004, and 2005 using data from the Student Description Questionnaire indicating student involvement in various activities, including the arts. As compared to their peers with no arts coursework or involvement:

In 2005, students involved in drama performance outscored the national average SAT score by 35 points on the verbal portion and 24 points on the math section.

Students considered to be at high risk for dropping out of high school cite drama and other arts classes as their motivations for staying in school.

Students who participate in the arts are 3 times more likely to win an award for school attendance than those who do not.

READING COMPREHENSION
From learning to read to the in-depth study of Shakespearean literature, drama can play a significant role in the continual development of students’ reading comprehension skills. Studies indicate that not only do the performance of a story and a number of other drama activities in the classroom contribute to a student’s understanding of the work performed, but these experiences also help them to develop a better understanding of other works and of language and expression in general.  The results below were gleaned from studies where educators and students alike noticed a difference when drama played a part in their classrooms,

A series of studies on the arts and education revealed a consistent causal link between performing texts in the classroom and the improvement of a variety of verbal skills, including especially significant increases in story recall and understanding of written material.

Performance of Shakespeare texts helps to improve students’ understanding of other complex texts including science and math material.

Drama can improve reading skills and comprehension better than other activities, including discussion.

In addition to building social and communication skills overall, involvement in drama courses and performance has been shown to improve students’ self-esteem as well as their confidence in their academic abilities.

High school students who are highly involved in drama demonstrate an elevated self-concept over those who are not involved .

Playwriting original works and dramatic presentation of existing works can help to build the self-esteem and communication skills of high school students.

The act of performing can help students and youth recognize their potential for success and improve their confidence .

BRIDGING THE ACHIEVEMENT GAP
Since the implementation of the No Child Left Behind Act, there has been a national focus on closing the "achievement gap” between students of varying abilities, socioeconomic status, and geographies among other factors that may directly or indirectly affect a student’s academic success.  The arts, including drama, address this issue by catering to different styles of learning, and engaging students who might not otherwise take significant interest in academics.  Additionally, research indicates that drama courses and performance have a particularly positive effect on at-risk youth and students with learning disabilities.

A study published in Champions of Change (1999) cites theatre arts, including performance, classes, and participation in a drama club, as a source for "gains in reading proficiency, gains in self-concept and motivation, and higher levels of empathy and tolerance towards others” among youth of low socio-economic status .

Drama activities can improve and help to maintain social and language skills of students with learning disabilities and remedial readers .