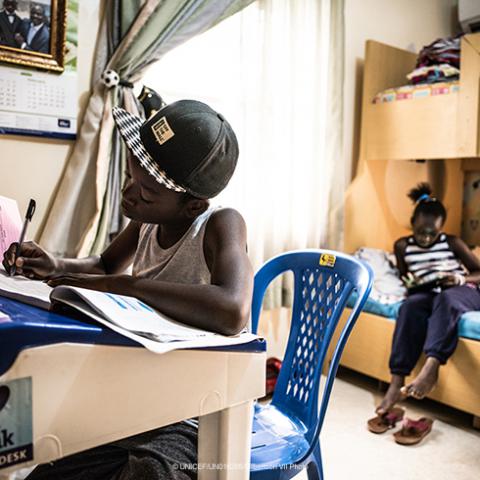 Progress in expanding access to education has stalled. Unless we act now, by 2030, more than 60 million primary school-aged children will still be out of school – more than half of them in sub-Saharan Africa.

In a gated compound just off the main road that runs through the Mairi Garage Market in Maiduguri, Nigeria, 15-year-old Muhammad Modu is hard at work.
Wielding a twig barely a foot long, Muhammad sifts through the smouldering refuse of his middle class surroundings. With the sun pounding down on him and the smoke eating at his plastic flip-flops, his body feels like it’s on fire. But the hardest part, he says, is waiting for the trash to arrive. You never know if you’ll find much to make the wait worthwhile. After two to three days of this painstaking work, Muhammad gathers enough material to sell for N150–200, or US$0.75–$1.00.
Amidst the prizes – plastic bottles and scrap metal – he occasionally uncovers items that captivate him, even if he can’t sell them. His favourite finds are books. “I’m always impressed with photos of children in school or playing football”, he explains.
Muhammad used to be one of those children. That was until two years ago, when Boko Haram sacked his village and sent his family fleeing through the bush.
Today, Muhammad is one of the approximately 124 million out-of-school children and adolescents throughout the world.
He is also one of an estimated 75 million children whose education has been disrupted by crisis. Complex emergencies and protracted crises – sparked by violent conflict; natural disasters, including those linked to climate change; or epidemics – do not just temporarily interrupt children’s lives and schooling. They can close the doors on education for a lifetime.

“I used to dream that I could be a soldier, or something like that. But now I’m not in school, so I don’t know what I could be in the future.” – Muhammad Modu, 15

Moving to the relative safety of Maiduguri hasn’t made things easy for Muhammad’s family. They lost everything when they fled. And although tuition is free at government-run schools, Muhammad can barely cover the cost of breakfast, as it is. Add to that the expense of a uniform, school supplies and transportation, and going to school becomes all but impossible.

Even before violent conflict forced Muhammad out of school, his country’s education system was not providing him the learning he needed. Educating a child is not just about getting her or him through school. Learning is what counts – and Muhammad, for all the time he did spend in school, can’t read the books he finds in the trash heap.
Worldwide, assessments show that far too many children are not gaining the knowledge and skills they need. Nearly 250 million children of primary school age – well over one third of the 650 million children in this age group – do not master basic literacy and numeracy, according to an estimate from 2013. For some 130 million of them, that’s despite attending school for at least four years.
Without these basics, children don’t get a fair chance in life. Quality education can open the doors to fulfilling, productive and remunerative work – the kind of jobs that can lift individuals out of poverty.

But children do not all get equal opportunities to go to school, stay in school and learn what they need to know – and the disparities are not random. Data from around the world show that children’s chances of getting a quality education are lower if they come from poor families; if they live in remote rural areas; if they are girls; if they have a disability; if they belong to an ethnic or racial group that faces discrimination in their society; or if, like Muhammad, they live in an area affected by crisis. Where these factors overlap they often reinforce deprivations. For instance, the poorest rural girls in Pakistan on average benefit from half a year less education than the poorest urban girls, according to 2013 data.
In Nigeria, disparities start early and widen as children grow older.
According to 2013 data, less than a third of poor Nigerian children between 15 and 17 years of age had entered primary school at the correct time, though nearly all of the children from richer households had. At each level of education, greater proportions of poor children drop out.
And as they drop out, their chances of rising out of poverty and overcoming disadvantage diminish. They struggle to provide for themselves, trapped in low-skilled, poorly paid, and insecure employment. They cannot help but pass on to their own children the deprivation and disadvantage that kept them from realizing their potential. The cycle of inequity grinds on.

In the Dalori camp for internally displaced persons, on the outskirts of Maiduguri, the usual trend has been turned on its head. Home to some 20,000 people, mostly from the Local Government Area of Bama, the camp is giving many of the Area’s poorest children a chance to go to school for the first time. Before coming here, many of the children, mostly from farming communities, were accustomed to spending their days working in the fields.
Yafati Sanda is the camp’s school principal. Every morning she makes her rounds, carting a stack of blue folders from class to class to check that all is in order: that the teachers are present, that attendance has been taken, that the children’s notebooks are up to date and their backpacks are clean.

She starts with Nursery 1, the pre-primary students. At least a hundred boisterous children are packed into a tent, yet somehow their teachers manage to maintain perfect command. Seated in orderly rows of five to a bench, they can hardly contain their excitement as they recite English nursery rhymes, bellowing “Rain, rain, go away!” into the dry savanna air.
Satisfied, Yafati continues on to her next stop: Primary 1A. “Good morning, Aunty”, the children greet her in unison. “How are you?” Yafati prompts them. “We are fine, thank you”, they chant back. Today, they are learning the parts of the body in English. Yafati checks the register, reminds the teacher to take the roll call and carries on to the next class.
When she arrives at Primary 2A, the room is in chaos. It is 9:30, an hour and a half after the official start of the school day, and still no teacher has arrived. Normally full of energy, Yafati is despondent. Even though there are 134 teachers for the 24 classrooms, it is a constant challenge to get them to show up to class.
“These children – since the morning they come from their home to study. Their parents, thinking that they are learning something… And you go into a class and no teacher?” She shakes her head, “I’m not happy.”

When Yafati started this school as a volunteer in May 2015, there were just 30 students. One of the initial challenges she faced was persuading parents to send their children to school.

“The parents don’t know the importance of education”, she explains. So the school launched a campaign to promote enrolment, especially among girls. “Do you need a female doctor to take care of your wife?” read posters pinned throughout the school’s walls. “Take your daughter to school.”

Today, enrolment has ballooned to approximately 8,000 students. But many of them do not actually attend.

Instead, they spend their mornings queuing for water – a line that sometimes extends a thousand people long. To help address this challenge, the school provides incentives: lunch is now delivered to the school premises and household items, like detergent, are distributed at school.
Still, the problem of teacher absenteeism has been a difficult one for Yafati to solve on her own. Apart from her regular monitoring, she has little ability to enforce attendance. The teachers, all on payroll from their Local Government Area, continue to receive their salaries whether they show up to work or not. But it’s more than a matter of dedication – many simply cannot afford the cost of transportation to the camp. Like Yafati, they live in the city, where the cost of living is exponentially higher than what they are used to back home.
With just 14 tents and 12 mobile classrooms, the school doesn’t have enough classrooms to accommodate all 8,000 students. Many school systems have dealt with this challenge through double shifts, with half the students attending morning classes and the other half attending afternoon sessions.
Educating 8,000 displaced children – paying their teachers, securing sufficient classroom space and providing the materials needed for teaching and learning – takes more than the heroic efforts of a determined and resourceful individual like Yafati. It takes money – and policies that put the needs of the most vulnerable children, whether in times of crisis or in times of normalcy, at the centre.
Yet education accounts for a small share of requests for humanitarian aid – and only a small fraction of those requests are funded. Less than 2 per cent of the funds raised by humanitarian appeals go to education. In addition to funding, educating children in emergencies requires rethinking the relationship between humanitarian and development activities. The increasingly protracted nature of today’s crises demands both rapid response and long-term solutions. Even before crisis hits, education systems need to be prepared – building the resilience of schools, teachers, students and the communities they live in, so they can respond to shocks and bounce back.

In the next 15 years, the world’s population of 15- to 24-year-olds will increase by nearly 100 million. Most of these young people will be in Asia and Africa. They will be the parents who raise tomorrow’s children, the workers who keep the global economy going, the leaders who determine what kind of world we live in. Today, they are children. They urgently need the quality education to which they have a right – and the world urgently needs every one of them to get it.
On average, each additional year of education a child receives increases future earnings by about 10 per cent. Each additional year a country manages to keep its children in school can reduce that country’s poverty rate by 9 per cent. Poorer countries see the highest returns.
Learning makes a real difference, too: If all children born in lower-middle-income countries today learned basic reading and math, their countries’ GDPs could increase thirteenfold over their lifetimes. Making sure that all children can acquire these skills would also create the conditions for more equitable patterns of growth, while increasing the size of the economy and reducing poverty.
If every child has the opportunity to enter adulthood with the skills needed to build a secure livelihood and participate fully in society, the effects could transform societies and economies.