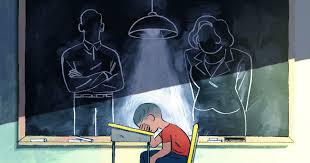 "Children do not lose their human rights by virtue of passing through the school gates....", the Committee on the Rights of the Child states optimistically in its first General Comment on "The aims of Education".

But the problem is that in real life, all too often children do lose many of their rights during many years of their childhood that are spent under compulsion in schools. And in many countries, there are no real and accessible remedies for violations.

There is a strong and understandable global focus on the child's right to education (CRC Article 28; "Education is both a human right in itself and an indispensable means of realizing other human rights", as the General Comment of the Committee on Economic, Social and Cultural Rights begins.

There is also an increased focus on challenging discrimination in the child's right to education and access to local schools: campaigning for equal access for girls and ending bias on grounds of race, colour, social origin, sexuality, HIV-status, pregnancy and so on. There is near-universal denial of the right to education for the many children in various forms of detention. And there is still very widespread denial of the right of children with disabilities to inclusion in their local mainstream schools, and many face compulsory segregation in "special" schools or complete exclusion. The new Convention on the Rights of Persons with Disabilities, with its strong Article 24 and other confirmations of the rights of children with disabilities, should provide for more rapid progress. Hopefully the complaints procedure provided in its Optional Protocol will be used to pursue de-segregation and other children's rights issues.

But all this is about getting children through the school gates: this Editorial is about what happens to their rights once they are through the gates... How many school students know that the United Nations is – at least on paper – actively engaged now in promoting their rights within all school systems globally?

In its General Comment No. 1, quoted above, the Committee on the Rights of the Child was echoing a US Supreme Court decision of 1969 which similarly stated: "It can hardly be argued that either students or teachers shed their constitutional rights to freedom of speech or expression at the schoolhouse gate."

The case was an early – 20 years before adoption of the CRC - and still very isolated example of high-level legal action to assert children's rights within the school gates. CRIN's growing collection of high level court judgments and decisions concerning children's rights already includes a number on school corporal punishment and one on children's rights to religious freedom in schools:

The case (Tinker v. Des Moines Independent Community School District, 393, US 503 (1969)) involved three school students (aged 13, 15 and 16) who in December 1965 decided to wear black armbands with peace symbols to school in protest at the Vietnam war. Their local school administration heard of the planned protest and decided to ban armbands in school. The students were suspended for wearing the armbands. The American Civil Liberties Union of Iowa supported them in appealing to the courts, through their fathers as "next friend". Four years later in 1969, the US Supreme Court upheld their appeal in a 7-2 decision.

Mary Beth Tinker, the youngest of the three students, has continued to work for social justice and freedom of expression throughout her life.

Another recent positive decision, quoting the Tinker judgment, involved a case brought by the American Civil Liberties Union on behalf of a junior at a Florida High School who had been forbidden by her principal to wear any sort of clothing, stickers, buttons, or symbols to show her support of equal rights for gay people. During a two-day trial in which a Florida high school principal testified that he believed clothing or stickers featuring rainbows would make students automatically picture gay people having sex, a federal judge ruled in May 2008 that the school violated students' rights. "Standing up to my school was really hard to do, but I'm so happy that I did because the First Amendment [to the US Constitution] is a big deal to everyone," said Heather Gillman, the plaintiff in the case. The judge issued an order that forces the school to stop its unconstitutional censorship of students who want to express their support for the fair and equal treatment of gay people. The judge also warned the district not to retaliate against students over the lawsuit.

Following on from the UN Decade for Human Rights Education (1995 – 2004), the first phase of the World Programme for Human Rights Education (2005 – 2007) has focused on implementing human rights education in primary and secondary schools. And this Programme is not just about teaching human rights: it involves promoting a rights-based approach to education, including respect for the human rights of all involved and the practice of rights within the education system. The first Plan of Action expands on this, detailing elements of a rights-based school:

As part of the Plan of Action, the United Nations Inter-Agency Coordinating Committee on Human Rights Education in the School System (UNIACC) has been formed. An Alliance of 12 UN organisations, including UNICEF and UNESCO and with the Office of the High Commissioner for Human Rights OHCHR) providing the secretariat, its task is "to facilitate coordinated United Nations support to the national integration of human rights education in national school systems"

An evaluation questionnaire from UNIACC had been filled in by 75 States by the deadline of March 2010.

The evaluation includes reviewing whether "the school environment itself respects and promotes human rights and fundamental freedoms; [whether] it provides the opportunity for all school actors (students, teachers, staff and administrators and parents) to practice human rights through real-life activities; [whether] it enables children to express their views freely and to participate in school life...".

It asks explicitly: "Do opportunities exist in schools for students to express themselves freely, to have responsibility, to participate in decision making (in accordance with their age and evolving capacity) and to organise for their own interests? Please mark on a scale from 1 to 5 (1 = Comprehensive opportunities exist, 5 = Not at all)". It also asks whether "young people/learners" have been involved in relevant national developments.

One wide and well-developed network of school student bodies which could be involved in this is the Organising Bureau of European School Student Unions (OBESSU). Founded in April 1975 in Dublin, Ireland, OBESSU brings together member and observer organisations from more than 20 European countries: member-organisations must be independent, national, representative and democratic school student organisations. Its Declaration of School Students Rights was adopted in July 2006 by the OBESSU General Assembly held in Ohrid, Macedonia.

School students must be involved in the decision-making processes in all matters of concerning the school. This must be guaranteed by legislation.

School students must have equal influence as teachers have in the school decision-making processes.

School students must have the right to assemble, strike, demonstrate and express their opinion both inside and outside the school. They must be able to do so freely and without sanctions.

Civil Rights must apply to all school students.

Education and learning should not be regarded as occurring only during the years in school. The school system should adapt itself to serve the principle of continuous education. Students must be taught abilities and given facilities to actively seek information themselves and not only to receive knowledge passively through the teaching process.

Privacy of information concerning individual school students must be respected and used only with the student's explicit prior consent.

Here is a speedy run-through of some of the CRC civil and political rights most often violated in school settings:

Non-discrimination: discrimination does not just limit many children's access to schools: it persists within schools in many forms: for example, resources of all kinds being unfairly distributed on the basis of geography, age, grading/testing, language, etc.; curriculum exclusions on the basis of gender, ability, disability etc.; prejudice, racism and sexism in curricula, examinations and testing. (article 2). CRC Article 29 provides a prescribes in detail what should be the aims of education – where is this adequately reflected in legislation, policy and practice?

Best interests: in how many States does education legislation require that the best interests of school children are a primary consideration in all actions that concern them in schools – both individual students and the student body as a whole? (article 3(1))

Respect for children's views: The Convention asserts the child's right to be heard and have his or her views given due weight in all matters affecting them – in all aspects of school life (article 12). And as the Committee on the Rights of the Child states in its General Comment No. 12: "These rights need to be enshrined in legislation, rather than relying on the goodwill of authorities, schools and head teachers to implement them".

Freedom of expression: imposed curricula and authoritarian teaching can severely limit freedom of expression, as can compulsory uniforms and other personal appearance issues, censorship of student writing and magazines, etc. (article 13)

Privacy rights: Do school students have any place to store their personal belongings. Do they have rights to see all school records and also to control who else has access to them? (article 16). And what about students intellectual property rights – many schools destroy pupils' work.

Freedom from violence: only 109 States have prohibited school corporal punishment, leaving 89 where the beating of millions of school students with belts, sticks or other implements is still lawful.  There are many other degrading punishments used in schools and very few States have systems of discipline with due process, designed with the involvement of school students. Some schools have locked isolation rooms. Detention, suspension and expulsion frequently occur without students' rights to appeal. There is an increased focus on violence among students – bullying: but how many states provide effective protection and compensation for victims?