Education amongst Syrian refugees in Lebanon 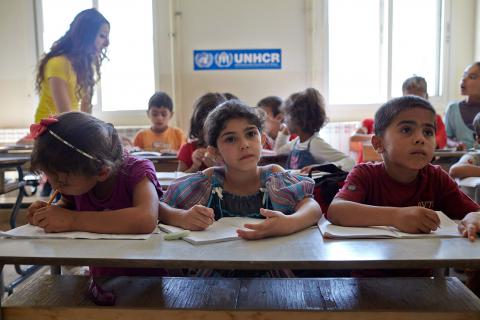 Lebanon currently hosts approximately 400,000 Syrian refugee school age children.[1] A mere 15 to 20 per cent of these refugees are enrolled in Lebanese public schools, often in localities already deemed ‘vulnerable’ by a recent UNICEF report[2][3].The added strain on tenuous public schools in marginalized areas poses fundamental challenges to a fragile education system. In spite of these issues, several Lebanese public schools introduced a second shift for the 2013-2014 academic year to meet the expanded needs of Syrian refugees. According to the Ministry of Education and Higher Education (MEHE), there are currently 29,902 refugee students attending second shift schools.[4]

Despite the efforts to widen access by the MEHE, UN agencies and international donors, formal education remains attainable for only 20 per cent of school age Syrians in Lebanon.[5] A mere 2 per cent of Syrians were both enrolled in and regularly attended schools at the secondary level. Part of the issue could be attributed to the costs of enrolment. Syrian refugees, who invariably fled under a variety of circumstances, are unable to afford even the nominal tuition and transportation fees without assistance. To make matters worse, only 30 per cent of Lebanese public schools offered a waiver of school fees[6]. Moreover, those refugees who manage to access formal education typically encounter a number of challenges that affect their capacity to integrate and remain in schools. A notable challenge lies in language. While Lebanon and Syria both speak Arabic, Lebanese public schools teach science and math in English or French after grade 7. This poses a major barrier to integration and retention of Syrian refugee students in the Lebanese education system. NGOs, private schools, and Syrian-led initiatives intervened to offer alternative education models, yet the viability of such efforts to address the needs of the out-of-school or disaffected refugee students remains largely unexplored.

[2]. The Lebanese Ministry Of Education and Higher Education presentation at The Sub-Regional Conference on Scaling up Quality Education Provision for Syrian Children and Children in Vulnerable Host Communities, 17-19 June 2014, Amman/Jordan.

[3] A composite index of concentration of vulnerable population and registered refugees was used to define five quintiles of vulnerability.  Lebanese data was based on the 2004 poverty study and CDR population estimate at the locality level and refugee data from UNHCR as of 30 April 2013.  See UNICEF, UNICEF Lebanon: Equity in Humanitarian Action (June 2013).

[4]The Lebanese Ministry Of Education and Higher Education presentation at The Sub-Regional Conference on Scaling up Quality Education Provision for Syrian Children and Children in Vulnerable Host Communities, 17-19 June 2014, Amman/Jordan.