When Your Young Daughter Wants to Act Like a Teen 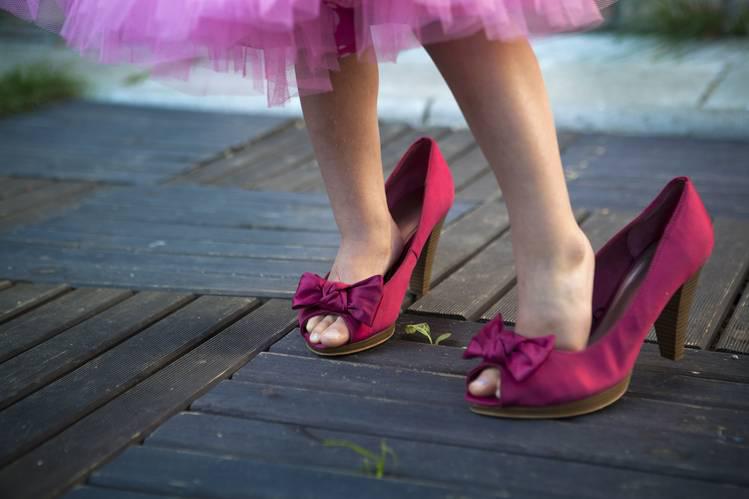 It’s an alarming moment for any parent: Your 6-year-old daughter announces that she wants to wear a miniskirt or crop top to look “sexy.” Or your 7-year-old starts dancing like a seductive pop star in a music video.

The natural reaction is overreaction. Some parents plunge into a discourse on the risks of inviting sexual attention, scaring the child. Others try to bury the matter by ordering the child never to talk or act like that again—inadvertently teaching her that any topic involving the word sex is taboo and should never be discussed with parents.

There are plenty of sexualized images for children to imitate. More than half the female characters in children’s Halloween costumes, dolls, action figures and Valentine’s Day cards wear provocative, revealing clothing, according to a 2016 study by researchers at Kenyon College. And children are being exposed earlier: About 1 in 6 children ages 4 to 5 already watch music videos, follow fashion trends and want “the latest stuff,” according to a 2014 survey of 815 mothers in the journal Body Image.

Ask open-ended questions such as, “What does it mean to be sexy?” says Jennifer Berger, executive director of About-Face, a San Francisco nonprofit that offers media-literacy training and resources for women and girls. Does it mean dressing so others will like you? Walking in a certain way to get attention on the playground? Or having fun, like the hip-hop dancers in music videos?

Give some dos along with the don’ts. “The expectations parents set are hugely important,” says Judy Vredenburgh, president of Girls Inc., a New York nonprofit education and advocacy group.

Explain to your daughter that you want friends and relatives to value her for how smart or athletic she is, or for her ability to solve problems and do things for herself, rather than how she looks, Ms. Vredenburgh says.

Without guidance, even young children may embrace the stereotype that girls should be valued only for their appearance and ability to please males. Nearly three-fourths of 208 children ages 6 to 11 rated paper dolls wearing short, low-cut tops and miniskirts or short shorts as more popular than dolls dressed in loose, long-sleeved tops and jeans, according to a 2015 study in Child Development. They also rated the more adult dressers as less intelligent, athletic or nice.

Those beliefs can affect children’s classroom performance, research shows. “The ones who believe they should be sexualized are the ones who say, ‘I want to be sure people don’t think I’m smart,’ ” says Christia Spears Brown, a psychology professor at the University of Kentucky, and one of the study’s authors.

Avoid sending a message that looking attractive is bad, but emphasize other attributes, says Joanna Faber, co-author of “How to Talk So Little Kids Will Listen.”

Praise her for what she does: “ ‘Look at how fast you ran! You carried that heavy bag. How did you get all those blocks to balance? You helped your friend when she scraped her knee,’ ” Ms. Faber says. “Kids are trying on a lot of hats as they find their identity. We have to make sure we give them lots of hats to try on.”

If she wants to have fun like dancers in music videos, offer classes in dance or gymnastics, or find videos of children dancing in ways you’d like her to emulate, Ms. Faber says. “Put on some music and dance around with her. Let her run and jump until she collapses in exhaustion.” Child-friendly videos and other media can be found on the websites A Mighty Girl and Common Sense Media.

Provide a range of acceptable clothing choices. “If she craves a purple miniskirt with ruffles, give her one that’s a little longer,” Ms. Faber says. “Don’t have clothing in her drawer that upsets you if she wears it.”

Many parents sharply restrict children’s access to media. A better route is to set limits, but also to watch TV and videos with children, Ms. Berger says. Research shows this helps children make better judgments about the characters they see.

Shailushi Ritchie sometimes sits beside her 9-year-old daughter while she plays computer games and comments on the avatars, which she sees as “pushing a hyper-sexualized image,” says Ms. Ritchie, a fundraising executive for a nonprofit who lives in Oak Park, Ill. “The only options are to be the girl with the big eyes, exaggerated figure and wooshy hair. There’s no Pippi Longstocking.”

Parents also need to be ready with answers to children’s sticky questions whenever they arise. When Ms. Ritchie’s daughter abruptly asked en route to a playdate whether dieting is bad, Ms. Ritchie quickly explained the different meanings of the word, the reasons people diet and the pitfalls of chronic dieting to be thin, including losing essential nutrients and “feeling hungry all the time, like you’re missing out.” Her daughter replied that dieting didn’t sound like much fun.

And when her daughter observed that Ms. Ritchie’s legs were more muscular than a rail-thin teenager’s, Ms. Ritchie, a former college soccer player and swimmer, told her, “I’m really proud of my legs, because they help me run far and fast,” she says. “When you get those moments, you try to emphasize substance over style.”