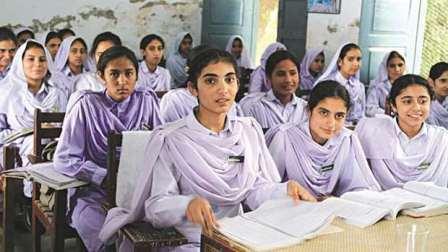 I recently visited a “girls club” – a safe space where adolescent girls come together with trained mentors to build their social networks and learn life skills – in the Tonk district of Rajasthan, India. As I arrived, I was greeted by a group of teenage girls bouncing along the road, so full of energy and laughter that I couldn’t help but smile, too. Just imagine, I thought, the potential of 600 million such girls.

History’s largest generation of girls aged 10-19 is here, ready to make its mark on the world. Governments, development organizations, and private institutions are eager to help them translate that youthful potential into an engine of creativity, economic growth, and social progress. But, on the path to such a future, girls continue to face major obstacles.

Some 170 million girls – almost one-third of girls worldwide – are not enrolled in school. This is a major missed opportunity: For every year of forgone schooling, a girl’s potential income drops 10-20 percent. Yet there are major barriers to boosting school enrollment – beginning with the persistence of child marriage.

Every year, 15 million girls are married before they reach the age of 18 – one every two seconds – with early or forced child marriage affecting about a quarter of girls worldwide. Beyond increasing the probability that a girl will suffer violence, early marriage boosts girls’ chances of early pregnancy by 90 percent. The likely result is a larger family that demands more unpaid child care, thereby undermining educational attainment and reinforcing the gender pay gap.

Girls who are married before age 18 also face a severe reduction in mobility, though they are not alone. A study in South Africa showed that, overall, girls face a drastic reduction in access to the public sphere – with spatial access falling from an area of 6.3 square miles to just 2.6 – when they reach puberty. Spatial access for boys, by contrast, more than doubles, from 3.8 square miles to 7.8, when they are seen as becoming men. Reduced mobility for girls puts them at risk of social isolation and limits their opportunities to build social capital.

As a result of these and other factors, only 47 percent of women in low- and middle-income countries are now in the labor force, compared to 79 percent of men. My research team estimates that if we cut the labor-force participation gap by just half – from 32 percentage points to 16 percent – GDP in the affected countries would increase by 15 percent in the first year alone, adding $4 trillion to global GDP.

Giving girls the skills and knowledge they need to become productive individuals who can participate in the 21st-century economy empowers them in all aspects of their lives, enabling them to contribute to their families, communities, and economies in ways they choose. It is the right thing to do for global development – and for girls and women themselves.

A growing number of governments, foundations, companies and communities recognize this, and are now investing in girls’ health, education and wellbeing. But considerable resources are being channeled toward ineffective approaches or – worse – programs that have been proved not to work. And too many well-meaning development actors regard girls as victims to be saved, rather than as the innovative, energetic game changers they are.

So how can we best expand opportunities for girls? We know, for example, that educating girls may be the most cost-effective investment for promoting economic development. We also know that girls, including those with children of their own, benefit considerably from access to sexual and reproductive information and services, which enable them to choose the size and structure of their families and ensure their own health and wellbeing.

But girls’ advocates – in governments, non-governmental organizations and development and funding agencies – struggle daily with meeting these needs. And, despite recognizing the multifaceted and interconnected nature of girls’ needs, we often struggle in silos, working on the same problems without communicating with one another. This lack of effective coordination, collaboration, or knowledge sharing carries through to investments, which often end up narrowly focused on a single project, sector, or geographic area – often weakening their effectiveness.

That’s why the Population Council created the Girl Innovation, Research and Learning Center, a kind of global knowledge hub for girl-centered research and programing. The GIRL Center, which I direct, aims to make the most of the world’s investments in girls, both by supporting evidence-based policies and by aligning the goals and priorities of various stakeholders.

To that end, we are building the world’s largest open data repository on adolescents, curating the Population Council’s records on more than 120,000 individuals of adolescent age, as well as data from other organizations working on girl-centered research and programs. The repository will enable rigorous analyses that provide policymakers with a deeper understanding of how girls’ lives and needs evolve during adolescence and which interventions are most effective for which groups (and under which conditions).

It will also connect people from different disciplines and sectors united by the goal of promoting systemic changes that give adolescents, especially girls, the opportunity to fulfill their potential.

Empowering girls to use their energies and talents to transform their societies will not be easy. The key is to pursue a comprehensive approach – one that recognizes the fundamental linkages among programs and objectives, takes advantage of proven solutions, and adopts a long-term perspective.

By Thoai Ngo, director of the Poverty, Gender, and Youth Program at the Population Council, also director of the Council’s new Girl Innovation, Research and Learning Center.