Talking to Children About Terminal Illness 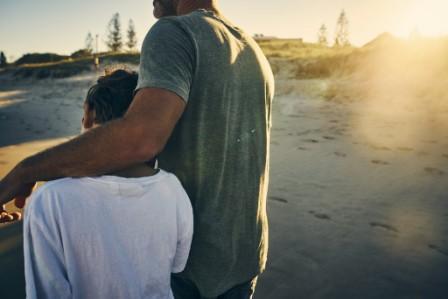 New guidelines call for speaking openly with children when they or their parents face life-threatening diseases.

“One of the most difficult things we ever have to do is to tell a child he or she has a very serious condition and may not survive it, or that a parent has a condition they may not survive,” said Dr. Alan Stein, a professor of child and adolescent psychiatry at the University of Oxford.

Dr. Stein is the senior author on two articles published last week in the British medical journal The Lancet, which suggested guidelines for talking to children about life-threatening illness, one on when the illness is the child’s own and the other on when a parent is ill.

The doctors and other health care providers who are treating a parent with a serious illness often don’t see this as their job, Dr. Stein said, but it can make a tremendous difference. Children are sensitive to changes in their parents’ behavior, he said, and profoundly aware of parental mood and family atmosphere.

“If we don’t tell them, they have to cope with their anxieties by themselves,” he said. “If it can be shared, they can get the kind of support they need, and the evidence is, this in many cases has benefits for the family system and the individual child.”

The guidelines call on the health care providers taking care of the child — or the parent — with the serious illness to help with this conversation, speaking directly with the child, when the child is sick, but also working with and supporting the parent, and offering specific age-appropriate advice. The articles discuss working with families in low- and middle-income countries, including in parts of Africa where the H.I.V. prevalence is high and affects both children and parents. There, part of the issue is the stigma of the disease. But even without that, talking about serious illness can be overwhelming.

Dr. Brenda Kelly, a fetal medicine specialist at Oxford who is a co-author on the new articles, said she has 10 years’ experience in delivering bad news to women who were carrying pregnancies that would not make it, or would result in babies who would not live.

“None of that prepared me for being the recipient of my own bad news,” she said. In May 2018, she was given a diagnosis of Stage 3 breast cancer, and she had to decide how and what to tell her own children, who were 9 and 6 at the time. “However articulate I am in my professional life, when it came to this, I was at a complete loss for words,” Dr. Kelly said.

She delayed telling her children only for a day, because of a special occasion. “It was my son’s birthday the day after my diagnosis, and my husband and I spent time in the bathroom, just crying, this is the last day of normality,” she said. Still, she said, having that incredibly difficult conversation “set us up for the treatment journey.”

Her 9-year-old daughter told her, “Mom, you have to trust me with the information.” Her daughter also asked her not to hide things, for example by running into another room to take a call from the hospital. She told them, she said, that after her chemotherapy and radiation, there might be times she looked bad, but it wouldn’t be the cancer getting worse, it would be the therapy. Still, her son went through a period of night terrors, convinced that the doctors had made a mistake, and she really was sicker.

“The question they ask is, are you going to die?” she said. “You yourself don’t know the answer.” With the new papers, she said, comes a charge to doctors and other health care professionals to help parents frame the answer to that difficult question, and not to delegate it to others. “There’s no easy way but I think it’s really important we do it and important that professionals navigate those really difficult waters, and hold our hand through the journey.”

The guidelines take into account the ways that children’s understanding of death and dying changes as they grow, and give advice for how to shape these conversations. With very young children, Dr. Stein said, discussion early on might emphasize the seriousness of the condition and the importance of treatment, but not necessarily the issue of death, unless they ask.

Children around 5 to 7 often feel very responsible when bad things happen, Dr. Stein said. One 7-year-old boy whose mother died became convinced that it was his fault because she had missed a clinic visit one day when he had a bad tantrum. “He felt he had caused his mother’s death, because she hadn’t gone to the clinic and gotten the information she needed,” Dr. Stein said.

When the children are the patients, they also worry that these conversations will be too painful for their parents, said Dr. Emily Harrop, a consultant in pediatric palliative care at Oxford who is a co-author on the articles. “I have seen in practice children becoming quite anxious and distressed, feeling a protectiveness of their parents, not wanting to open the conversation, perhaps not even feeling they have permission to die.”

She recalled caring for a 4-year-old girl with a brain tumor whose mother believed that her daughter did not know she was going to die. When the mother was out of the room, the child asked the doctor, “How will I get through the ceiling when I go up to heaven?”

Dr. Kelly described her own medical team as “exemplary” in how they broke the news to her, but at the moment of diagnosis their focus was entirely on her, while she was more anguished about her children. “It would help tremendously if these conversations start with health care providers,” she said.

The new guidelines are meant to encourage exactly that. Dr. Stein said that because these conversations are so difficult, doctors worry that they will get it wrong and somehow do harm. “Do it carefully and sensitively and support the family and you’re usually fine,” he said.

“I’m not saying I’m glad I’ve got cancer, but it certainly brought us to a new level as a family,” Dr. Kelly said. “One of the benefits of going through this is thinking, you know, I underestimated these children.”

When she goes back to work in June, she said, she plans to add a new element to her practice when she has to break bad news to expectant parents. “I will make time to talk to them about how to initiate, and how to conduct the conversation with their existing children.”