The risk of being your child's best friend 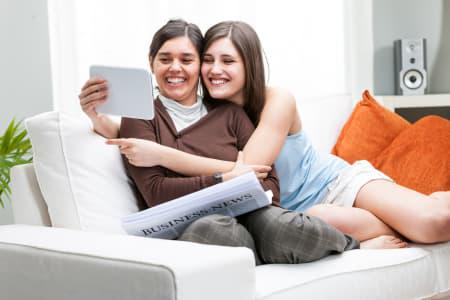 Susan Wholley bought her daughter her first drink, and she was the person her daughters turned to when they had questions about sex and marijuana.

The hospice worker, tutor and single mother to 19- and 22-year-old daughters, said she loves the open relationship she has with them, where nothing is off-limits.

"They know they can say anything to me, and come to me about everything," Wholley said. "Is there more of a friendship? There definitely is, with the understanding that they can't cross the line."

That line - the one that's separating a parent from being a friend - is one that many parents are straddling these days, and some are leaning more toward the friendship side.

Can you be best friends and parents with your children simultaneously? And, should you?

Studies dating back to the 1960s have proved the merits of authoritative parenting, but in recent years, as attachment parenting (essentially, reacting to the needs of the child first) has grown and children-first initiatives have been broadcast to parents, the lines of how to parent have been smudged.

Should you be authoritative? Or should you give them the freedom to be who they are, to make their own choices and to be on the same level as the adults?

"Children want and need boundaries. They cannot ask questions about how far it is to go," says Barbara Harvey, executive director of Parents, Teacher and Advocates in Atlanta, which helps parents become better at parenting. "They depend on parents to set the parameters and keep them safe."

When children don't have boundaries, they become stressed. And this is the reason why so many children are stressed: They have no real security at home, Harvey said. When a child is a parent's best friend, there is often too much pressure placed on the child to know about - and to be overly involved in - adult situations.

"Children are not mentally or emotionally ready for this role," Harvey said.

As a result, it often forces children to grow up too quickly, and keeps them from being actively and normally involved with their own peers.

While a child may choose to identify a parent as a "best friend," it's different if a parent calls that child a best friend. It's too much pressure on the child if the parent confides in him, as a best friend would.

"This places the child in a confusing situation, where they feel they need to support and guide the adult, who is supposed to be supporting and guiding them," said Nicole Beurkens, a licensed psychologist. "Parents need to be firmly in the role of guide - and be willing and able to set whatever rules and expectations are needed, including appropriate consequences, for the good of the child."

The line between being a friend and a parent is thin, however, which makes this separation murky at times. Both require good listening skills, spending time together and looking out for each other.

"But at the end of the day, your best bud isn't going to make you follow rules, and isn't always giving you good advice," said Casherie Bright, a therapist who focuses on kids and teens.

"Parents need to be able to discipline their child, and be OK if their child doesn't always like them, because parents have to make hard decisions, like making kids brush their teeth, even if they don't want to, or go to bed at a good time, even though it's more fun to stay up all night."

Wholley likes to remind her daughters that unlike their friends, she won't allow them to shut her out of their lives for two weeks. And they're not allowed to yell at her. After all, she's their mother, even if they may be leaving her nest. Many parents think that if they have a good, friendly relationship with their child, that the child will do what the parent wants, because they're friends and because the child wants to please them.

But typically, the opposite happens.

Children get confused about their role, and if the parents try to establish any rules, the child resents it because they never had any rules - and now they feel like their parents are hypocrites, Bright says.

This "hands-off" approach tends to lead to rebellion and other issues.

Shanna Donhauser, a child and family therapist, said that when parents lose their strength and power, children struggle with having so much power, and they tend to scream, become anxious and unsettled.

"They already feel small and vulnerable, and they need your size and strength to help them feel protected," Donhauser said. "You can still be friendly with your children, but you must still be in charge, and have clear and consistent boundaries."

Age is a factor, however.

Parents should be completely authoritative with children up to 36 months, when children are too young to make any decisions for themselves. "This is when kids need parents to make all the decisions, and place the strongest and most protective barriers," Harvey said.

When the child turns 3, there is a shift toward more democracy, but parents still make most of the decisions. However, Harvey said, children should get to make some decisions at this point based on a parent's choices: peanut butter and jelly or ham sandwich for lunch?

As children enter elementary school, parents can allow children to make age-appropriate decisions about what to wear to school, what instrument to play, etc. With primary-schoolers, parents have to walk a fine line between authoritarian, democratic, and permissive.

"Parents need to pay close attention and determine almost on a minute-by-minute basis what kids need," Harvey said. "The younger the teen, the more parenting is required; as they age and move into university, this is where the mentor/friend role is most appropriate."