The long road to safety in Serbia 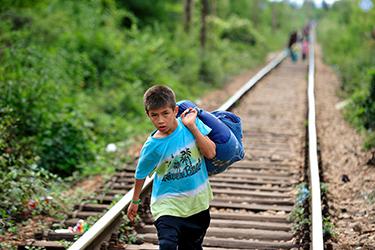 Bahir is one of tens of thousands of unaccompanied children who have crossed the Mediterranean Sea since the beginning of 2015 to seek safety and protection in Europe. Today, he's living with the Petrovics, a foster family in Serbia, while he waits to be reunited with his family.

In a small town in Serbia, a teenage boy with a baseball cap paces the front yard of Petar and Petra Petrovic’s* family home. He is wearing headphones and quietly singing while listening to rap music.

The newest member of the Petrovic household is Bahir,* a 16-year-old boy who has been placed in foster care with the family. After fleeing Afghanistan several months ago, he made the arduous journey through Pakistan, Turkey, Greece and the former Yugoslav Republic of Macedonia before finally reaching Serbia.

Upon arriving at the Serbian border, officials noticed he was travelling alone. Bahir explained to the police that his parents had already applied for asylum in Western Europe so he was officially identified as an unaccompanied child. Serbian social services placed Bahir in foster care where he now waits to be reunited with his family.

“My journey to Serbia took four months. Petra is a very kind woman. When I came to their home, I weighed 64 kilograms and now I weigh 72 kilograms,” says Bahir smiling, while explaining how he has been accepted into his new foster family.

The Petrovic family have provided much needed care and support to Bahir. He is one of the lucky few, as most unaccompanied children lack support networks in Europe, and many have experienced some form of psychological trauma, some having been exposed to conflict, violence and abuse. Many boys and girls have lost contact with their parents in their home countries or have become separated from their families on the journey to Europe.

Bahir is one of tens of thousands of unaccompanied children who have crossed the Mediterranean Sea since the beginning of 2015 to seek safety and protection in Europe. Over that period, more than 1 million people – the majority from Syria, Afghanistan and Iraq – have undertaken perilous sea crossings, fleeing conflict and economic hardship. This has undoubtedly been one of the largest refugee crises Europe has faced since the end of World War II. In June 2015, 1 out of 10 arrivals was a child. By the beginning of June 2016, 35 per cent of those arriving in Europe were children.

A safe family environment is crucial for the development and well-being of every child, regardless of their status. In addition to Bahir, three more preschool-aged children have been placed into foster care with the Petrovic family. Over the last ten years, 15 children have been placed in their care, including six refugee and migrant children. Fostering brings tremendous joy to Petra, but as she says, it is also a big responsibility.

“I find this wonderful. I can't find the right words to describe this to you. Maybe you have to take even more care of them than of your own children, because the responsibility is bigger,” Petra says.

“There was a period of about four months when we didn’t have any children staying with us. Our house was empty. But when we were already expecting the children to come, we felt such joy. And as long as we are able to do it, and we are healthy, I would love it if we could always have foster children,” says Petar Petrovic, as three boys who have just returned from kindergarten run around him.

“It is important for them to understand what a family is. To see what it’s like to grow up in a family, how the days are spent, the mornings, when we get up, when we have lunch, dinner, watch TV together, being together with them when they are playing,” says Petar.

Bahir has already picked up some Serbian in the Petrovic’s home. He wants to learn all about managing a household from Petar, because he doesn't know how long he will remain in Serbia. Bahir says that even when he is reunited with his birth family, he will not forget the Petrovic family.

UNICEF continues to work with the Ministry of Labour, Employment, Veteran and Social Affairs in Serbia to further strengthen foster care in the country. After decades of reforms, the Government has made significant progress in providing alternative care for children who are not living with their birth families, including the urgent placement of children with caring foster families by trained social workers.

This has proven to be a successful approach during the response to the refugee and migrant crisis – social services have been providing protection and placement in foster families for unaccompanied refugee and migrant children who are staying in Serbia. This is much better for children like Bahir than being placed in an institution or in detention.

Advocating for the best interests of unaccompanied children

It is not known exactly how many unaccompanied and separated refugee children have crossed into Europe since the beginning of 2015. The latest available figures show that nearly 96,500 unaccompanied children applied for asylum in Europe in 2015 – around 20 per cent of the total number of children who sought asylum.

Throughout the crisis, UNICEF has been continuously advocating for alternatives to the detention of unaccompanied children, for access to services at all times, and for family reunification for children in Europe. UNICEF has also advocated for effective asylum procedures for children, as well as systematically acting in their best interests when making decisions related to children. Through its network of Country Offices and National Committees, UNICEF has been mobilizing partners and advocating with governments to open national child welfare systems to refugee and migrant children and give them the same opportunities for family-based care as children from those countries.

In Serbia, UNICEF’s response to the refugee and migrant crisis has been made possible by its donors, its partners, and the Government of the Republic of Serbia.

*Names have been changed to protect identities.