If I Were a Parent: Teaching kids good manners 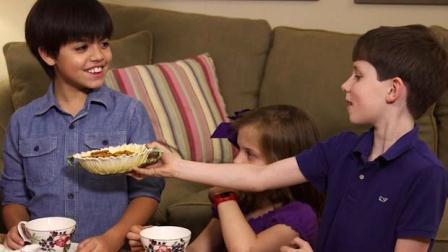 What happens when you ask a group of elementary-school kids how they would teach their children manners if they were the parents? Based on the group of kids we brought together in Atlanta, you get a number of really good ideas. So, parents, listen up!

Katerina Hoysa, 8, said she would take her kids to a really nice restaurant so they could watch how the other diners behaved. "And they'll see how everyone else is doing it, and they'll start doing it too," Katerina said as part of CNN's video series called "If I Were a Parent," featuring conversations with children.

Felipe Ramirez-Abrahamsson, 10, said he would teach his kids himself by sitting at a table and showing them how they should put napkins on their laps and keep their mouths closed while eating. And if that didn't work? "I would probably get them a private tutor if I had to do that," he said.

If he were looking for someone to work privately with his kids, he might turn to Faye de Muyshondt, founder of socialsklz:-), which offers private and group programs to teach children and young adults the social skills they need for the playground and the classroom.

De Muyshondt came up with the idea for her business, now nearly eight years old, while teaching in the Department of Media, Culture and Communication at New York University.

"Social interaction and communication skills were just crumbling," said de Muyshondt, a mother of two and author of "Socialsklz:-) for Success: How to Give Children the Skills They Need to Thrive in the Modern World." When she started teaching, she would look at students during lectures. Five years later, she got used to looking at the backs of computer screens. "So, I mean, we have to teach these skills. It's more important than ever to teach these skills. We've got to start with the basics."

Too many parents either don't teach their kids the basics of manners or try to teach their children at the wrong time, she said. "The big problem is that when parents go about 'teaching' these skills, they're usually in a corrective mode, which is not a teaching moment," de Muyshondt said.

Admonishing a child for not looking someone in the eye while shaking their hand or not saying "please" or "thank you" isn't effective, she said. What parents need to do is teach their kids about good manners, help their children practice and then apply the manners to real-world settings.

"The cool thing about teaching these skills is that every day there's the opportunity to practice," she said. For instance, a parent can teach a child what goes into a greeting and how they need to remember "eyes, smile, body language," and then have them practice it and do it for real.

"It's like this crazy moment of 'I didn't even say anything, and I made an impression on you,' but that has to be taught, and there's no place where kids are learning these skills, which is why I started socialslkz:-) and why this business, this little random idea, turned into a business."

De Muyshondt encourages parents to teach kids why good manners, such as saying "please" and "thank you," are important. In some programs, she'll ask students how they would feel if they got her a really thoughtful present that they spent time both finding and wrapping but she didn't say anything when she opened it.

By focusing on empathy, thoughtfulness and gratitude, they can see why this is important, she said. As opposed to "you should do this" and "you should do that," it's getting kids to understand why it doesn't feel great to serve someone a meal and not receive a "thank you," for instance.

"It's just rude," said Ava Lambert, 7, one of the kids we interviewed in Atlanta, when I asked her why it's better to have good manners than to say something such as "Mom, get me this; get me that."

Parents have been complaining about their kids' poor manners for decades, but the lack of manners and etiquette seems to be a bigger concern in an age of helicopter parenting, when parents get overly involved in their children's lives and happiness, de Muyshondt said.

"There was this wave of parenting ... it being so much about the child that there was an oversight on (the part of) the people around the child and the fact that we don't all operate independently, that we live in a village," she said.

By trying to secure our kids' happiness and provide them with the best and most enriched lives, we sort of forgot about the other half of it: that there are other people in the village, she said. "I think that that's had an impact on the way that kids socialize and interact also."

Though de Muyshondt says that year after year, the problem of kids lacking strong social and communication skills has only gotten worse, she has noticed a recent shift on the part of parents.

"Parents are starting to get more on board with, 'Hey ... let's start putting limitations. Let's start bringing good old-fashioned, they call it, manners and etiquette, but bringing that back into the picture,' " she said.

"Especially with modern technology, it's the skills that you and I maybe picked up by the time we were 10 or 12 years old, are taking longer and longer because there is less face-to-face interaction."