Be open and honest: How I told my child I had cancer 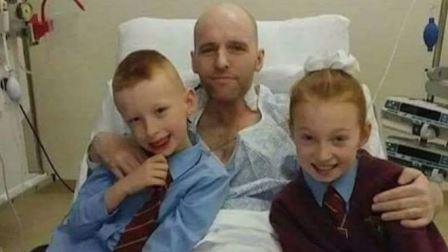 One in two of those born after 1960 in the UK will be diagnosed with some form of cancer during their lifetime - many of those will be families with children who will face that question.

University College London Hospital Cancer Collaborative has released a video explaining how to go about it.

Honesty is the best strategy and crying is OK because it communicates to children that showing emotion is normal, it explains.

The animation also reminds parents that young children can have a very basic understanding of sickness and may think wrongly that you can "catch" cancer like you catch a cold.

It also warns that some children might blame themselves or think that all people with cancer will die.

A short version of the video was posted on the BBC Family and Education Facebook page and parents and children began to share their advice.

Sammy Blair: I told them I'll die but I'll fight

Thirty-seven-year-old Sammy Blair lives in Motherwell and found out just before Christmas that he has terminal stomach cancer. He immediately told his young children Ellie and Lennon.

"I told them I had been for an operation but they couldn't get the cancer out and there is nothing we can do. I told them that even though I look OK on the outside, I don't feel fine inside.

"I said that yes, I will die but that I'll fight for as long as I can.

"It was devastating to hear my wee boy say, 'Daddy, I don't want you to go.'"

Sammy told his children to ask him any questions but they still refuse to discuss his illness with close family and he worries that they are blocking out the information.

Adele Hanna: Say the big words and be as factual as you can

Adele Hanna, 52, and her late husband, Richard, broke the news of Richard's prostate cancer when their three-year-old sons saw him taking tablets at dinner.

"I was cooking tea, and one of the boys asked if the medicine was going to make Daddy better.

"Me and Richard just looked at each other - we both became tearful. Eventually I took a deep breath before starting a simple conversation saying, 'No, Daddy isn't going to get better, Daddy is seriously ill and he is going to die. You're not going to see him again."

She said that brutal honesty was the best strategy for her family.

"It was hard, very hard. My husband had to walk out of the room.

"When he returned we talked about Daddy's tears and mine - after all, it's normal to cry when you feel sad.

"We had a big hug and all cried, followed by lots of kisses. The boys finished their dinner, swinging their feet and chitter-chatting.

"It is about being kind, being honest and being clear, which is not easy at a time of fear, panic, anger and denial," Adele says.

Adele and Richard also emphasised to their sons that their dad did not want to die and that it was nobody's fault but it would definitely happen.

"Say the big words and be as factual as you can," she explains.

Natasha Boor: Tell your children about every step so they know what's happening

Natasha Boor's mum, Rebecca, died from cancer 10 years ago - but Natasha, who is 26 and now a care assistant in Kendal, barely remembers her mum discussing it.

"She said it was an illness like a growth or alien growing in her stomach and she would get surgery.

"When it didn't work she said she just needed some medicine."

Rebecca died shortly afterwards, but even to this day, Natasha is not sure what type of cancer she had.

"I overheard her she saying she was scared of dying - but that was different to what she was telling me.

"I don't remember her telling me she would die."

The mystery around her mum's sickness made Natasha feel like her family were keeping secrets, and she connects this to anxiety and hypochondria she has experienced as an adult.

"I grew paranoid about things being kept quiet and I have unanswered questions and memories about things that happened at the time, things I can't ask anyone about."

"My mum was an amazing, honest and open woman but she was also very proud - she didn't want me to see her upset or in pain."

Now Natasha tries to channel her memories of her mum.

Natasha's advice to parents who find themselves having to tell their children about a serious illness is to be fully open.

"Tell your children about every step so they know what's happening - make sure they're aware of what is going on for their sake and for their future."