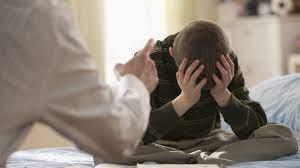 Repeatedly getting angry with children, yelling, hitting or shaking them likely leads to stunted brain growth when they are adolescents, a new study says, suggesting the effects of such behavior are similar to serious abuse.

“The implications go beyond changes in the brain,” said Dr Sabrina Suffren, the study’s lead author. “I think what’s important is for parents and society to understand that the frequent use of harsh parenting practices can harm a child’s development. We’re talking about their social and emotional development, as well as their brain development.”

Studies have previously shown that children who experienced severe forms of abuse have smaller prefrontal cortexes and amygdalae, both structures which play key roles in emotional regulation and are related to the emergence of anxiety and depression later in life.

The new study, published on Monday in the journal Development and Psychology, found that harsh parenting techniques, when used repeatedly on children between the ages of two and nine, also result in similar damage to the same regions of the brains – usually exhibited during adolescence.

“It’s the first time that harsh parenting practices that fall short of serious abuse have been linked to decreased brain structure size, similar to what we see in victims of serious acts of abuse,” Suffren said.

The study looked at data concerning reported parenting techniques and children’s anxiety levels. This was then compared to MRI scans of the children’s brain structures when they were aged between 12 and 16.

The damage isn’t just physical, either. The researchers say the harsh parenting techniques are also associated with anxiety and depression problems later in life.