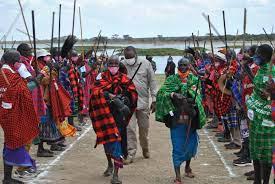 Tribal leaders in northern Kenya pledged on Friday to end female genital mutilation (FGM) and child marriage in their communities, a step hailed by President Uhuru Kenyatta as “an important milestone” in boosting girls’ rights.

One in five women and girls aged between 15 and 49 in Kenya have undergone FGM, which usually involves the partial or total removal of the female genitalia and can cause serious health problems, the United Nations says.

Kenya outlawed the widely condemned practice a decade ago, but it continues in some communities such as the semi-nomadic Samburu tribe, who see it as necessary for social acceptance and improving their daughters’ marriage prospects.

About 86% of Samburu women and girls have been cut, according to the U.N. children’s agency, UNICEF, and Kenyatta said the declaration by Samburu elders to end FGM was a key step toward realising his goal of eradicating the practice by 2022.

“My father used to obey and respect traditions, and we also should do the same. But in doing this, we should identify traditions that harm our children and drop them, and only continue with those that are of importance to them,” Kenyatta said during an event to mark the declaration in Samburu County.

“The girl child, just like the boy child, can be taught of very important traditions in our communities so that they can graduate as adults without being harmed,” he added.

About 23% of Kenyan girls are married before they reach the legal age of 18, says UNICEF. Many are also subjected to FGM which is seen as a “rite of passage” before they wed.

In the Samburu community, child marriage prevalence is about 17%, according to a 2017 UNICEF survey.

‘IT WILL GO AWAY’

An estimated 200 million girls and women worldwide have undergone FGM, an ancient ritual practised in at least 27 African countries and parts of Asia and the Middle East.

In some cases, girls bleed to death or die from infections and the practice can also cause lifelong painful conditions such as fistula and fatal childbirth complications, according to the United Nations.

Samburu elder Lepaga Leadikie, 67, said Friday’s declaration aimed to show that the community accepted girls and women who had not undergone FGM and that marriage prospects would not be linked to having been cut.

“We will always ensure this is followed through and with those who do not adhere to what we say, we will involve chiefs all across our community to catch up with them and arrest them,” Leadikie told the Thomson Reuters Foundation.

Local resident Jacinta Leorto, 56, said she was forced to undergo FGM as a 12-year-old.

“My mother took me to a circumciser who cut me so badly that I bled to near death,” said Leorto, adding that she had also had complications during the birth of her first child.

“This is not something I would wish on any other girl or woman. Among our culture, the elders always make the final decisions, and now that they have agreed to end this practice, it will go away,” she said.

Kenyatta’s goal of ending FGM next year would put the east African nation ahead of a global target to eradicate it by 2030.

But women’s rights groups said the Kenyan target was unlikely to be met, partly because the coronavirus pandemic has led to a surge in reports of girls undergoing the rite.