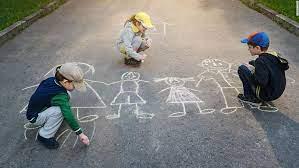 It turns out children really are listening to what you say.

Children who overheard someone saying negative words about a particular group of people developed negative biases toward them, according to a study published Wednesday in the journal Child Development.

A group of 121 children ages 4 through 9 were split into smaller groups where they either overheard a child or adult say negative claims about a fictional group of people called "Flurps" or "Gearoos" or where they heard nothing negative.

The negative message some of the children indirectly overheard said, "Those Flurps/Gearoos are really bad people. They eat disgusting food, and they wear such weird clothes. The Flurps'/Gearoos' language sounds so ugly."

Children are always trying to categorize people, Conder said, and at that age, it's normal for children to categorize others based on skin color, clothing and other factors to understand the world around them.

Not all children were negatively influenced

The 4- and 5-year-old study participants did not view the Flurps or Gearoos in a negative way after overhearing negative words said about those groups.

Conder said she didn't know why the younger children were not significantly affected, but she hypothesized that it could be related to their shorter attention spans and their ability to pick up on overheard information (because it requires more processing).

The age of the person delivering the negative messages didn't affect the impact it had on the children, which Conder said surprised her.

Children are easily influenced by what they hear as they're growing and developing, said Maysa Akbar, chief diversity officer of the American Psychological Association, who was not involved in the study.

Akbar said when children overhear negative information about a group, they could "start to think of different groups as different and not want to associate with those groups."

It's important to be aware of what information you're saying around your children, even indirectly, Akbar said.

On the flip side, parents can use the findings of this study to positively influence their children to be good allies, according to Akbar.

This can include purchasing diverse toys for your children, she said, or making sure your child has a diverse friend group.

"The sooner that we can normalize situations for our children, the more they will become engaged in and accepting of diversity," Akbar said.

Conder was in the process of conducting a related study, which would focus on measuring children's influence when indirectly hearing positive information about a group. She had to pause the study due to the pandemic last year.

When she's able to resume the study, Conder said she hopes to see similar results where children were influenced by what they heard indirectly because that means children could learn how to "form more positive attitudes toward new people."