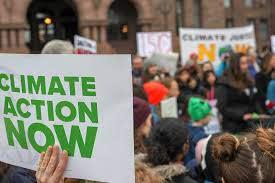 At the UN Human Rights Council on Wednesday, a teenager from Côte d’Ivoire has explained why protecting the environment matters so much.

The rare and refreshing intervention came from 14-year-old activist Junior, who spoke out against alleged industrial pollution, including from the cocoa production sector, in his home town of San-Pédro, in the West African State.

This damage was being done, despite the fact that the effects of environmental degradation on children and their rights were “completely preventable”, Ms. Bachelet insisted.

At the same time, the High Commissioner warned that over-exploitation of the environment “increases the risk of infectious diseases like COVID-19 jumping from animal to human hosts”.

She also insisted that now was a key opportunity to discuss the rights of the child in the context of the COVID-19 pandemic, as 93 per cent of children live in environments where air pollution exceeds World Health Organization (WHO) guidelines, making them more susceptible to air-borne infections, such as the new coronavirus.

Echoing that concern, Junior explained that children made up between 30-40 per cent of those suffering from respiratory and skin diseases, according to data from his town’s health authority.

“I want the authorities to take this question of the environment to heart. Because we children are suffering a lot,” he said via video message.

“If nothing is done to protect the environment, then all your (the Council’s) efforts to realize children’s rights will be burned by the sun and drowned by the rain.”

Also participating in the debate, at the Council, WHO’s Dr Maria Neira said that one in four children globally is dying because of environmental factors, at home or elsewhere, and 570,000 children under five, are dying from respiratory infections every year.

These include pneumonia, which is attributable to indoor and outdoor air pollution, and second-hand smoke, said the head of the agency’s environment, climate change and health unit.

Other common killers include poor access to clean water, sanitation and hygiene, with diarrhoea responsible for the deaths of 297,000 under-fives.

By 2025, half of the world’s population will be living in water-stressed areas, Dr Neira warned.

This is already a problem in least developed countries, where one in five health care facilities lacks water, sanitation service and waste management.

Turning to climate change, the WHO senior official added that as temperatures and levels of carbon dioxide rise, this promotes pollen growth, which is associated with increased rates of asthma in children.

“We have been listening to the children marching and demanding we protect their future,” she said. “We no longer need to raise awareness; we need to act. Many in our audience are uniquely positioned to provide a leverage for these new greener healthier society to happen.”