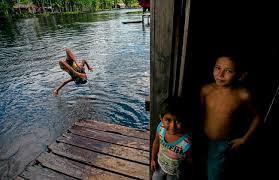 Millions of children could be pushed into work by the coronavirus crisis, the UN said Friday as it braced for the first rise in child labor in two decades.

In a joint brief, the International Labor Organization (ILO) and UNICEF, the UN children's agency, noted that the number of children locked in child labor had declined by 94 million since 2000.

But the UN agencies warned that "the COVID-19 pandemic poses very real risks of backtracking."

Friday's report pointed out that the crisis would likely cause a significant rise in poverty.

According to the World Bank, the number of people in extreme poverty could potentially skyrocket by up to 60 million this year alone.

"As the pandemic wreaks havoc on family incomes, without support, many could resort to child labor," ILO chief Guy Ryder said in a statement.

The relation between swelling poverty and a surge in child labour appears clear, the report said, pointing to studies from some countries indicating that a one-percent increase in poverty leads to at least a 0.7-percent rise in child labor.

The report also stressed that the crisis could push children already working to put in longer hours under worsening conditions.

Others could be forced into the worst forms of labor, seriously threatening their health and safety, it said.

The brief pointed out that children who lose one or both parents during the coronavirus crisis could be forced to step in as breadwinners or find themselves more vulnerable to exploitation.

Girls, it warned, were particularly vulnerable to exploitation in agriculture and domestic work.

"In times of crisis, child labor becomes a coping mechanism for many families," UNICEF chief Henrietta Fore said in the statement.

The agencies voiced alarm at mounting evidence that child labour has risen as schools have closed during the pandemic.

They noted that temporary school closures were now affecting more than one billion pupils in over 130 countries.

And even when classes restart, parents might no longer be able to pay for school.

The brief proposed a range of corrective measures, including the elimination of school fees, and urged countries to boost social protections and provide easier access to credit for poor households.

"As we re-imagine the world post-COVID, we need to make sure that children and their families have the tools they need to weather similar storms in the future," Fore said.

According to the most recent ILO estimates published in 2017, around 152 million children were forced into work from 2012 to 2016, including 73 million in hazardous positions.

The UN is to release fresh data on the extent of child labour globally next year.