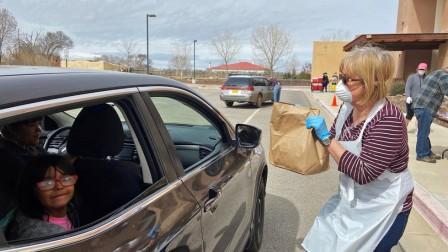 A new study has found that children in the United States are suffering the highest rate of food insecurity ever recorded in the country, as tens of millions of Americans are barred from working under coronavirus-induced lockdowns.

Food insecurity for American children was significantly worse in April than during any year since 2001, before which point no comparable data is available, according to research published on Wednesday by the Brookings Institution.

“Looking over time, particularly to the relatively small increase in child food insecurity during the Great Recession, it is clear that young children are experiencing food insecurity to an extent unprecedented in modern times.” wrote Brookings researcher Lauren Bauer, who called the findings “alarming.”

Citing two nationally representative surveys, Bauer found that by the end of April, one in five US households – and two in five households with children 12 and under – could not afford enough food “often,” or “sometimes,” figures she said were “higher than they have ever been on record.” Compared to 2018, food insecurity for households with children under 18 had seen a 130 percent spike.

While the research did not investigate the causes of the surge in food shortages for households with children, the soaring figures come as more than 30 million Americans file for unemployment benefits, thrown out of work by Covid-19 containment measures that have shuttered wide swathes of the US economy. The true number of workers out of a job is likely higher, however, given that some are not eligible for benefits, while others simply never apply to receive them. And though Congress has passed a number of relief packages worth trillions of dollars, many have found the aid insufficient to keep their families afloat for weeks, or even months, under lockdown.

Thousands of residents have taken to the streets to protest the containment policies across a handful of states, demanding they be allowed to return to work. The demonstrations have been spurred on by US President Donald Trump, who has urged some governors to “liberate” their citizens, arguing that “we can’t let the cure be worse than the problem itself.”

Despite the pressure from the commander in chief and their own citizens, the governors have approached reopening cautiously, fearing a resurgence of the virus, which has infected more than 1.2 million people in the US and killed in excess of 73,000. According to federal guidelines, states should not lift their containment policies before observing a steady fall in new infections for two weeks straight, and are expected to carry out widespread testing for the virus.

Short of ending the lockdowns keeping millions from earning a livelihood, Bauer recommended ways the government could mitigate the country’s fast-growing food insecurity problem – including increasing food benefits under the Supplemental Nutrition Assistance Program (SNAP), as well as broadening eligibility for the Electronic Benefit Transfer (EBT) card, which provides low-income residents with funds for food and other essentials.