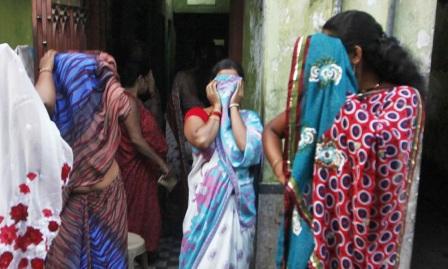 For more than a year, Nasima Gain did not leave her house. She spoke to no one, refused to meet friends and lay in bed.

Closeted in her room, the Indian teenager was consumed by guilt, blaming herself for being snatched from her village, taken to a neighboring state and sex trafficked into a brothel.

She recalls the day of her abduction, aged just 14, vividly.

“I was dressed in a sari that day because we were celebrating (a festival),” she said at a relative’s home.

“I think it was the first time I was wearing a sari and remember being very happy. That morning, I never imagined that I would be so terrified by night,” she said from Gobra, a village of fewer than 500 families along the India-Bangladesh border.

Like tens of thousands of teenagers trafficked from the eastern state of West Bengal to brothels across India or into domestic servitude, Nasima was sold by one of her relatives.

“I trusted him,” she said of a childhood friend who grew up to traffic her. “We had planned to spend the day out. He took that chance and trapped us.”

Nasima and a friend were made to join a dance group then taken to a dance bar and sold for sex. She was beaten and abused for almost a year before a tipoff brought police to the rescue.

That was in 2010 and Nasima said she emerged an utter wreck.

Now she is on a mission to ensure others who escape human trafficking and modern slavery get the help that eluded her.

“Previously I stammered and had no confidence,” she recalled. “Now I ... keep my head high.”

Once she was one of about 40 million people estimated by the United Nations to be trapped in slavery; now Nasima is among the countless survivors striving to rebuild life.

Many face a personal struggle, others - like Nasima - wage legal battles hoping to boost support from governments.

With dreams of becoming a social worker, she is asking the High Court of West Bengal to ensure survivors get cash and help rather than face endless questions, rejection and abandonment.

No date is scheduled for the next hearing but Nasima refuses to give up, despite her frustration with the lack of progress.

“I feel very angry. We are trying so hard yet nothing has happened. (But) I will stay with the case until it is over.”

Human trafficking in India rose almost 20 percent in 2016 from the previous year, government data shows. More than 60 percent of 23,117 rescued victims were children.

“I wanted to build a group to fight against the problem,” Nasima said, referring to her legal battle. “We need individual care plans and a sustained means of livelihood.”

Her journey from victim to campaigner is an unlikely one.

Now 22, Nasima documented her first, lonely year post-rescue in a diary, jotting down all the confusion and anger. She hid it in a suitcase to lock away the darkest 10 months of her life.

“My family was happy I was back and I never really told anyone, including my parents, about what I had been through when I was away. Even today they think I was just a dancer at a bar.”

Social worker Mohidul Islam met Nasima a week after she was rescued. He visited her house almost every week, calling out to her and trying desperately to persuade her to venture out.

“Her family had practically been ostracized by villagers and Nasima’s state of shock was understandable,” he said.

Islam’s persistence paid off. A year later, she agreed to visit Sanjog, a charity, where she met fellow survivors.

“There was nothing to be ashamed of. I realized that I was not alone and it was the trafficker who was guilty,” she said.

As she discovered fellow survivors, Nasima felt she needed to go beyond her own fate to confront the wider problem.

So in May 2017, Nasima filed a public interest litigation (PIL) to address the “psychological, physical and re-integrative needs” of all trafficking victims.

A PIL is a petition that specifically seeks wider social change, rather than pursuing an individual case for justice.

She and her three co-petitioners, all sex traffic survivors, want education, job training, healthcare and legal aid, in addition to access to safe accommodation and money.

The petition notes that while many survivors live in abject poverty, designated rehabilitation funds lie untapped.

Money, said Nasima, is the best way to get back on two feet.

“Fortunately my family accepted me after the rescue, but in many cases, relatives and society refuse to take them back. If families don’t support, then the police will also not support.”

Rescued girls face stigma and risk being re-trafficked in the absence of a proper care plan, activists say.

Advocate Anirban Tarafder says the current process is drawn out and insensitive to victims’ trauma.

“It is hard to say if this PIL will bring about a big change but it is definitely going to create some ripples and waves,” said Tarafder, who is representing Nasima in court.

Between April 2016 and December 2018, 500 million rupees ($7 million) was disbursed among 16,837 beneficiaries, the women and child development ministry told the Thomson Reuters Foundation.

West Bengal, which reported the most trafficking cases in India in 2016, is one of the worst states when it comes to implementing the scheme, activists say.

They say few survivors get training, compensation is often slow and many lack protection, so risk being re-trafficked or abused by their own family.

For instance, just 75 survivors have received job training under a state scheme that began in 2015, according to data obtained by Kolkata-based advocate Vipan Kumar.

“If the government does not protect her, both physically and economically, then they are doing more harm,” said Sarfaraz Ahmed Khan, an anti-trafficking academic, as family shame often drives a victim straight back to sex work.

Nasima understands such delays only too well.

The last hearing in Nasima’s case was in January last year and since then she has been left waiting, angry and frustrated.

“My entire life has gone, getting pictures clicked and giving interviews,” Nasima said.

She hopes her legal fight will deliver a different outcome for women like her who need one basic thing - money - to turn life around.

“In remote villages like mine ... money silences all the talk and so if a survivor earns, the stigma fades automatically. Money is omnipotent, it helps to overcome all hurdles and that is why survivors have to get back on their feet quickly.”