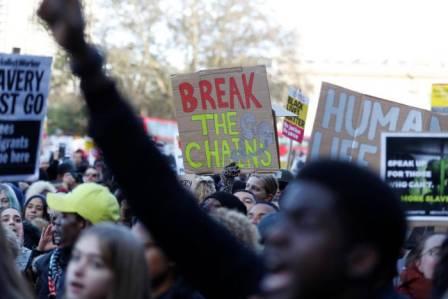 At least 7,000 suspected victims of modern slavery were uncovered in Britain last year, up a third on 2017, according to data that campaigners said on Friday raised concerns about the government’s ability to support a growing number of survivors.

A larger share of men - six in 10 of the possible victims - and children - 44 percent - were identified in 2018 compared to the previous year, revealed calculations by the Thomson Reuters Foundation based on data from the National Crime Agency (NCA).

The number of British children referred to the government last year for support more than doubled to 1,419, amid rising concern from police chiefs about the expanding “county lines” drug trade with gangs using teenagers to transport their wares.

People who say they have been enslaved can get counseling, housing, legal aid, and allowance payments during a recovery period under the government’s National Referral Mechanism (NRM) - the scheme whereby victims are identified and given support.

Yet activists say the system is beset by a lack of standards over care and oversight, and long delays in decision making that leave many victims in limbo - and drive some back into slavery.

“There is a concern with the rise in demand for support over whether needs are being properly met,” said Kate Roberts, head of office at the Human Trafficking Foundation. “We need to know that the quality of care is not being negatively affected.”

“The government needs to ensure it is not just identifying people, but providing proper support. We need reforms now.”

A spokesman for Britain’s Home Office (interior ministry) said the department was committed to reforming the NRM to ensure victims of modern-day slavery get the support they need.

“We have more than doubled the number of caseworkers to reduce outstanding cases, and are introducing measures to ensure quicker, more effective decision-making,” the spokesman said.

The Home Office in 2017 announced several reforms to the NRM, including extra shelter and support, drop-in services and an overhaul of the decision-making and review processes.

Yet most reforms have yet to be implemented, activists say, and at least 2,200 people have been waiting for at least a year to find out whether they will be recognized as victims of slavery, according to government documents released last month.

Possible victims are given 45 days to recover while their cases are considered, and government guidelines say a decision should be made “as soon as possible” after this period of time.

Labor exploitation - from men working in car washes to children forced to carry drugs - remained the most common form of slavery, while most suspected victims were from Britain, Albania and Vietnam, the same as in 2017, the data revealed.

The huge increase in possible British child victims - most estimated to be drug mules - comes at a time when specialist support for children trafficked within the country is under threat, according to Jakub Sobik of Anti-Slavery International.

“Support for them (British children) is up in the air,” he told the Thomson Reuters Foundation. “(This) essentially puts their safety, wellbeing, and even potentially lives, at risk.”

Despite being hailed as a global leader in the anti-slavery drive, Britain said in July it would review its landmark 2015 law amid criticism that it is not being used fully to jail traffickers, drive firms to stop forced labor or help victims.

Britain is home to at least 136,000 modern slaves, according to the Global Slavery Index by rights group Walk Free Foundation - a figure 10 times higher than a government estimate from 2013.

The Thomson Reuters Foundation’s calculations were based on an analysis of four separate quarterly NCA reports for 2018 on referrals to the NRM, the last of which was published this week.