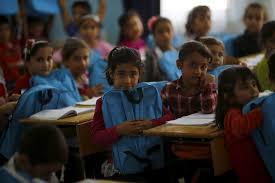 Even though some older refugee children may do as well in school as their native-born peers, younger immigrants can still face unique learning challenges in elementary school, a research review suggests.

Researchers analyzed data from 34 studies of learning problems in 29 different groups of refugee children and found their risk of difficulties could be influenced by parental misunderstandings about a foreign education system, teacher stereotyping and bullying or discrimination.

At the same time, family cohesion, parental involvement and teacher sensitivity about linguistic and cultural heritage could all help refugee children succeed, researchers report in the journal Pediatrics.

“In general, around one in ten children have some kind of learning difficulty,” lead study author Dr. Hamish Graham of the Center for International Child Health at the University of Melbourne in Australia told Reuters Health by email.

Like any child, refugee kids might struggle with intellectual impairment, behavior or attention issues, social interaction, autism, or vision and hearing, Graham said.

“However, children of refugee background have often missed early detection opportunities and frequently have significant gaps in their prior schooling,” he said. “For children of refugee background, entering school is an enormous transition that often involves learning an additional language and adapting to new expectations, routines and culture. This makes it difficult for educators and health workers to detect learning problems early enough to provide appropriate supports.”

Half of the studies Graham and colleagues included in their analysis were published in 2010 or later, and many looked at refugee children in Australia, the U.S. and Canada.

Refugees in the studies came from many regions, including sub-Saharan Africa, North Africa, the Middle East, East Asia and the Pacific, Central Asia and Europe.

While most of the studies focused on adolescents, 13 included primary school students and one examined preschool.

None of the studies looked directly at autism, language impairments or brain disorders tied to struggles with reading and math.

Eight studies reported educational outcomes at the secondary level, or high school, and six of these studies found refugee children did as well as native-born students.

Ten studies examined behavioral and emotional problems and found these were more common overall in children of refugees than in other kids, particularly with students under age 10.

Twenty-five studies explored the factors that influence success in school, with mixed results.

One large U.S. study, for example, found kids of more educated parents did better. But two Canadian studies found parents’ knowledge of the language in their new country was more important than their education level in helping kids succeed.

Limitations of the analysis include the widely varied designs in the small studies reviewed, which the authors caution makes it impossible to draw broad conclusions about how children of refugees fare in school. The studies also focused on refugees settling in the developed world, even though most refugees live in developing nations.

“We don’t have evidence on the best educational approaches that can support preschool and primary school children to recover from past trauma, settle in their new country and achieve educational outcomes that will give them the best opportunities to participate as active citizens in their new society,” Ignacio Correa-Velez, a public health researcher at Queensland University of Technology in Brisbane, Australia, who wasn’t involved in the study said by email.

Even so, the findings may offer parents and educators a roadmap of issues to navigate as they try to help children of refugees succeed in school, the authors conclude.

“This study is reassuring in that it highlights how well children from a refugee background can do when given the right support and educational opportunities,” said Dr. Mina Fazel, a psychiatry researcher at the University of Oxford in the U.K. who wasn’t involved in the study.

“These children arrive into new countries with a wealth of experience and represent different cultures and perspectives which can greatly enhance the classrooms into which they arrive,” Fazel added by email. “It is therefore important to do what we can to support their settlement into schools.”