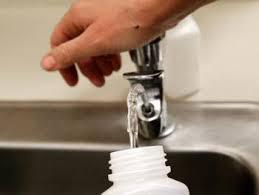 Portland Public Schools failed to follow federal protocols and did not notify parents after high levels of lead were detected at two of its schools two months ago, the district said on Friday.

Levels of lead, a toxic substance that can damage the nervous system, exceeding the U.S. Environmental Protection Agency maximum were found in 14 fountains and sinks at Creston and Rose City Park in March, according to a statement released by the district on Friday.

In an email to parents and staff on Friday, the Portland Public Schools said that it failed to follow EPA protocols when it kept the fountains and sinks supplied with water while it worked to replace and retest many of the fixtures.

"We apologize for not following this protocol," the district said.

The district added that it "regrets not having notified families and staff as soon as the tests indicated that there were elevated levels of lead."

The Portland Public Schools announcement comes as water quality in schools and communities across the United States come under heavy scrutiny after high levels of lead were found in the water in Flint, Michigan, a community of 100,000 people.

Public officials have been blamed for poorly handling the crisis in Flint as three state and local officials were criminally charged in April in an investigation into their handling of the lead levels.

A mother of two Portland school children said in an email to Reuters late on Friday evening that she was furious.

"I actually became a bit shaky, that type of heart-pounding mad. I shocked that they would knowingly allow children to drink poisoned water," Elizabeth Silva said.

In a statement and a second email to parents on Friday, the district vowed to take steps to address the issue including shutting off drinking fountains throughout system and providing staff and students with bottled water until the end of the school year.

The district also said it will also use bottled water for all food preparation and disposable plates and utensils for the remainder of the year.

Results of additional testing at the two schools will be made public during the week of June 6 and water testing will be done across the district this summer, the district said.