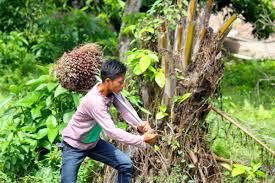 A two-month investigation found "a disturbing system of abuse" on palm oil plantations run by a subsidiary of food manufacturer Indofood, which produces PepsiCo's snacks in Indonesia under a joint venture partnership.

"PepsiCo must require that Indofood work rapidly to investigate and address the labor violations outlined in this report," RAN spokeswoman Emma Lierley told Thomson Reuters Foundation in an email.

PepsiCo said its chief executive had written to Indofood in the light of the findings detailed in the report.

"The letter acknowledged the gravity of the allegations and confidence that Indofood is taking them as seriously as PepsiCo does," the company said in a statement to the Thomson Reuters Foundation.

"We take any alleged violation of labor and human rights policies seriously," PepsiCo.

Indofood did not respond to a request for comment, but said in a remark published in the report that it complied with all Indonesian laws and regulations.

The probe found Indofood's subsidiary categorized many of its long-term workers as temporary, meaning they had no job security and earned far less than permanent employees in what the groups called "non-standard" form of employment practice.

Women especially were rarely given permanent positions and made to do some of the most toxic jobs, such as apply highly hazardous pesticides, without adequate protection, the report found.

The groups also accused the company of turning a blind eye to child labor, with children as young as 13 spotted helping with harvesting at the plantations.

Harvesters, who struggle under a high quota system requiring them to collect a certain amount before they can earn their wages, often bring their wives and children to help make ends meet.

At one of the two plantations, workers received less than the local minimum wage of 2 million rupiah ($150) a month for permanent workers, or 80,000 rupiah a day for casual workers, the report, released last week, said.

Palm oil, commonly used in soap, cosmetics and food spreads, has been one of the fastest expanding crops in the past few decades.

Lierley said the findings were the tip of the iceberg for Indonesia's palm oil industry.

It is a major driver of growth for Southeast Asia's largest economy but has been regularly linked to the destruction of rainforests and wildlife habitats, as well as displacement of indigenous communities.

"The findings are unfortunately indicative of all-too-common systems of exploitation on palm oil plantations, and the industry is rife with such labor rights and human rights violations," Lierley said.