The children who run away to work: Ethiopia's hidden weavers 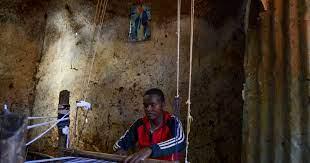 Five barefoot young boys were walking to town to look for work when they were apprehended by the police, in a cat-and-mouse battle to stamp out child labour among traditional weavers who produce Ethiopia’s famous, white ‘shamma’ shawls.

The Gamo and Dorze people of southern Ethiopia have woven the soft, cotton cloth with its delicately embroidered edges for decades, proud of their heritage and of a valuable source of income in the impoverished Horn of Africa nation.

“My family will not be hurt (that I left),” said one of the rescued boys, sitting in a government-run children’s shelter in Chencha, some 450km southwest of the capital, Addis Ababa.

“They will only regret that I will no longer be working for them as a shepherd,” he said, as officials tried to trace the parents of the five runaways, all aged between eight and 10.

The persistence of exploitation in the weaving industry illustrates the challenges in meeting a United Nations (U.N.) goal of ending child labour by 2025 in Africa, where 87 million children work, usually on family farms or small businesses.

Interviews with about a dozen child weavers, as well as parents, activists, and officials in and around Addis Ababa and Chencha found child labour is thriving because of poverty, culture, family pressure and clandestine trafficking networks.

Mathewos, 13, has been weaving in a windowless room since his mother fell sick six months ago and his cousin, Wesenu, brought him to the capital to work, even though he is under Ethiopia’s legal working age of 15.

“I provide food and clothing for him,” Wesenu told the Thomson Reuters Foundation, as Mathewos, whose name has been changed to protect his identity, worked on a scarf.

“It is better for him to learn how to weave here rather than being a shepherd in his hometown,” said the 42-year-old, who kept answering questions posed to Mathewos, saying that he considered himself like a father to the boy.

The U.N. says most of the world’s child labourers are in Africa and Ethiopia is home to one of the largest populations. Government data shows that 43% of under 18s - 16 million children - work in a country of 115 million people.

The bustling streets around Addis Ababa’s main market for traditional clothes, Shiromeda, were the hub of the illegal child weaving trade until the government shut down the workshops and issued warnings in homes and schools that it was a crime.

“Despite a win at Shiromeda, child labour in the weaving sector ... has not vanished but only changed form and location,” said Endeshaw Menychil of the Bureau of Labour and Social Affairs.

Children now mostly work on the outskirts of Addis Ababa, where they are out of sight. One hidden hotspot is Wolete, where dozens of boys play table football and eat out when their employers are out selling the shawls they have made.

In his photo studio, former child weaver Teklu Haimelo, 41, said dozens of boys in the area work illegally as weavers for about 100 birr ($2.27) a week.

“(Their employers) bring them from the countryside to Addis and promise the parents they will enroll them in school. But the kids become a source of income,” Teklu said.

“They will not tell you if they are mistreated. But they are all depressed. Many of them do the job because they have to eat and survive.”

After years of strong economic growth, conflict and COVID-19 are making life harder in Ethiopia, with prices and unemployment on the rise, while population increases add to pressure on land.

Education is not a priority for many families. Only 54% of children complete primary school, according to the U.N. Children’s Fund and Ethiopia’s literacy rate of 52% is below the average of 65% in sub-Saharan Africa, World Bank data shows.

“Education can change the community,” said Zematch Chamo, primary school director in Zozo village, a few kilometres from Chencha, the jumping off point for most child weavers heading to Addis Ababa. “But poor people will not see this bigger picture.”

Although the ministry of women, children and youth drew up a 10-year development plan last year, which involves hiring social workers, hotlines to report abuse and a universal child benefit, it is short of funding and staff to implement it.

On the village’s lush hills, dotted with potatoes and sorghum, Mengistu Mado is torn over the future path for his children.

Mengistu sent his son Melaku to the city when he was 10 with a distant relative who promised to send money home.

It never arrived. And when Mengistu heard that his son was being beaten and starved, he brought him home. But Melaku later returned to the city, where he now works as a weaver.

“He helped me a lot. Our life has changed for the better now,” said Mengistu, 45, who is still raising seven younger children.

“I hope that half of my children will be able to study. If I can send them to school, I will ... but if I am struggling, I will send the other boys to their brother in Addis Ababa.”

Charity worker Mulu Haile has dedicated two decades of her life to convincing parents like Mengistu to educate their children, rather than risk them being trafficked to urban areas by unscrupulous brokers whose only interest is in making money.

“Parents don’t know the consequences,” said Mulu, whose charity Mission for Community Development Program, has been forced to stop its anti-trafficking work as donor priorities have shifted elsewhere.

Although the government has established committees to reunite rescued children with their families, campaigners said most were likely to migrate again because of poverty, hope for a better life and community expectations.

Police in Chencha have apprehended 36 children heading to urban areas for work since January but many more slip through the net, said Markos Balcha, the district’s child trafficking expert at the Bureau of Women and Children Affairs.

Temesgen is one of those invisible children.

His parents sent him to work in a stranger’s house one year ago, when he was 14.

It is a crime to hire children under the age of 15 under the 2019 labour law, although there is no defined penalty.

“I really want to go to school,” said the teen, whose name has been changed to protect his identity, as he sat behind a loom in a workshop that also serves as a dormitory for three young weavers. “But I don’t know how.”