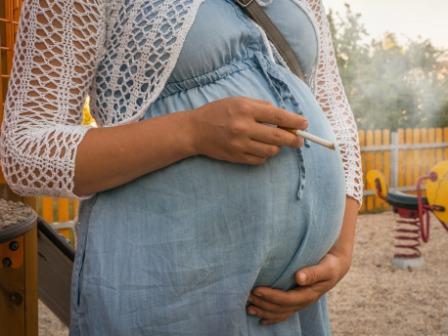 Children born to women who smoked during pregnancy are at increased risk of psoriasis, a new study suggests.

In an analysis of data on nearly 26,000 children born in Denmark, researchers found that maternal smoking during pregnancy was associated with a 40% increased risk of childhood psoriasis. And that increase rose with the number of cigarettes smoked each day to nearly 300% among children whose mothers smoked 16 or more cigarettes a day while pregnant, according to the report in the Journal of the American Academy of Dermatology.

“Our study suggests that tobacco smoking may be a biological risk factor for psoriasis, including for fetuses with in-utero exposure to maternal smoking,” said the study’s lead author, Jonathan Groot, a researcher in the department of public health at the University of Copenhagan.

“Maternal smoking may increase the risk of pediatric psoriasis, in part, by exposing the fetus to nicotine, which may stimulate biological processes implicated in psoriasis,” Groot said in an email. “The fetus may under some circumstances be exposed to tobacco metabolites to a greater degree while the mother is pregnant, than a child will be exposed to (with) passive smoking.”

Psoriasis is an autoimmune disease that affects the skin, leaving people with thick red patches of skin that most often appear on the elbows, knees, scalp, back, face, palms and feet.

To take a closer look at the impact of maternal smoking on the fetus’ later risk, the researchers turned to nationwide data on pregnant women who were recruited from 1996 through 2002 for a long-term study. The analysis included 100,415 pregnancies.

The researchers analyzed maternal cigarette and nicotine-replacement product use at several time points: prenatally, early in infancy, and when the children were 11 years old.

Among the 25,812 children in the study, 281 had developed psoriasis by age 11 When the researchers estimated the impact of maternal smoking on the risk of psoriasis, they found that compared to offspring of non-smoking mothers, children were 1.39 times as likely to develop psoriasis if their mothers smoked when pregnant.

In a separate analysis, the researchers found a similar relationship between nicotine replacement therapy used during pregnancy and an increased risk of psoriasis in children (a 36% increased risk), but cautioned that the numbers of children with psoriasis born to women who quit smoking and used nicotine replacement during pregnancy were small: just six kids fit that criteria.

The new findings did not surprise Dr. Bernard Cohen, a professor of pediatrics and dermatology at the Johns Hopkins Medical Institutions in Baltimore.

“There is data looking at smoking in older kids and adults showing a connection with the appearance of psoriasis and/or its severity,” Cohen said. “And it’s not just psoriasis. There are other inflammatory skin diseases that smoking has been shown to be a risk factor for.”

The most likely explanation is that smoking might trigger the development of psoriasis in people who are genetically predisposed to the condition, Cohen said.