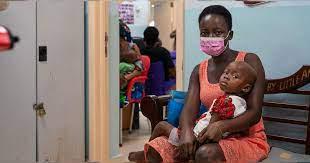 Nearly 30,000 children in sub-Saharan Africa are believed to have died from cancer during the COVID-19 pandemic, according to the Regional Office of the World Health Organization (WHO).

Drastic measures to prevent coronavirus spread, and heightened focus by health systems on response, led to disruptions in other essential health services on the continent.

Cancer screening and treatment, including for childhood cancers, were hit especially hard.

A WHO survey found screening was affected in 46 per cent of countries, while 13 per cent reported a more than 50 per cent disruption.

“We estimate that more than 28,000 children died of cancer in sub-Saharan Africa in 2020. This is truly heartbreaking as childhood cancers are curable if detected early and comprehensive care provided,” said Dr. Jean-Marie Dangou, Noncommunicable Diseases Programme Coordinator at the WHO Regional Office.

In Africa, the childhood cancer survival rate is around 20 per cent, compared to more than 80 per cent in high-income countries.

As early diagnosis improves chances of survival, WHO stressed that significant improvements can be made in the lives of children with cancer by identifying the disease early and avoiding delays in care.

The UN agency fears a significant backlog in screening and treatment due to the pandemic could lead to delayed diagnosis and treatment. This would put further strain on Africa’s overburdened medical resources and increase avoidable cancer deaths.

“Substantial investment in cancer prevention and care, including quality training of medical professionals, must be made if we are to avert cancer deaths and cases, especially among children, in our region,” said Dr. Dangou.

“As individuals, we must take the initiative to better understand the childhood cancer warning signs to improve early detection and treatment.”

Naomi Otua from Ghana makes regular visits to her 10-year-old grandson, James, who lives in the Central Region of the country.  On one of her trips, she noticed something was seriously wrong as the boy had jaundiced eyes and had lost a significant amount of weight.

James was eventually diagnosed with Acute Lymphoblastic Leukaemia, the most common form of childhood cancer. He is among the roughly 400,000 children and adolescents diagnosed with cancer every year globally.

James began chemotherapy, which he has continued for the past three months. “His condition has greatly improved,” said Ms. Otua, adding “I am very happy about that.”

While 80 per cent of childhood cancers are curable, “this is dependent on early detection and progressive treatment,” according to Professor Lorna Awo Renner, Head of the Paediatric Oncology Unit at the Korle-Bu Teaching Hospital in Accra, where James was treated.

Worldwide, most children with cancer live in developing countries like Ghana, but only around 20 per cent to 30 per cent receive treatment, often due to cost.

In Ghana, cancer treatment is not covered under the National Health Insurance Scheme.  The average cost to treat childhood cancer is about $1,000, and up to $7,000 for leukaemia, which is far beyond the reach of many citizens.

“In Ghana, about 50 per cent of patients used to abandon treatment halfway due to lack of funds. However, this figure has been reduced to 15 per cent with support from a number of benevolent individuals and organizations,” said Professor Awo Renner.

Back in 2018, WHO announced a new Global Initiative for Childhood Cancers (GICC) and Ghana was among six countries selected to receive support for its implementation.

One of the major strategic GICC partners is St Jude Children’s Research Hospital in the United States, whose financial support has helped improve childhood cancer care in Ghana, Senegal and Zambia.

“Working closely with the Ghanaian government, we have helped to build and sustain a high quality national childhood cancer programme with a target of achieving at least 60 per cent survival rate by 2030,” said Dr. Francis Kasolo, WHO Representative in the country.

The UN agency has also provided technical support to health workers at Korle-Bu Teaching Hospital, in addition to monitoring and surveillance tools.

For Professor Renner, sending children back home once they have been declared cancer-free provides a great sense of fulfilment. She remains hopeful that James will soon be able to beat the disease. “These children can still go on to lead full lives,” she said. “I see it happen all the time.”