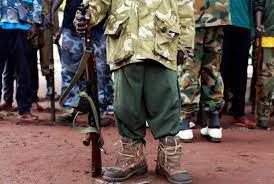 Armed groups in Mozambique are increasingly kidnapping children as a warfare tactic, putting victims at risk of sexual violence, early marriage and being used as fighters in the country’s worsening conflict, aid groups said on Wednesday.

At least 51 children have been abducted over the last year in violence that has killed thousands and displaced many more in a northern region torn by an Islamist insurgency, but aid workers say the true number of kidnappings could be much higher.

“Abducting a child constitutes one of the six grave violations against children in times of conflict, as defined by the United Nations,” said Chance Briggs, Mozambique country director for charity Save the Children.

“The experience of being abducted can have an immediate and lasting impact and consequences for boys and girls (including) death, sexual violence, exploitation and abuse,” Briggs told the Thomson Reuters Foundation in emailed comments.

In more than 20 conflict-plagued countries around the world, tens of thousands of children are forced to become child soldiers by armed forces, exposing them to extreme levels of violence, according to the United Nations.

Insecurity linked to the insurgency that flared in the southern African country in 2017 has driven more than 700,000 people from their homes, with at least half of those displaced estimated to be minors, Save the Children said.

It warned, however, that there could be many more as cases often go unreported.

Kidnapping victims are frequently exposed to further trauma such as witnessing beheadings or seeing their homes being set alight, the charity added.

The International Committee of the Red Cross (ICRC) said it had registered more than 2,600 appeals in Mozambique between September 2020 and April 2021 from people who lost track of family members, most of whom are young adults and children.

“There is a very high number of unaccompanied children (who are) extremely vulnerable to all kinds of abuses and exploitation,” said James Matthews, deputy head of the ICRC’s mission in Maputo.

Children are not only recruited by armed forces and groups as fighters. They are also used as informants, looters, messengers, spies and as domestic or sexual slaves.

“The situation for children in (the northernmost province of) Cabo Delgado is beyond precarious,” said Mohamed Malick Fall, regional director for eastern and southern Africa for U.N. children’s agency UNICEF.

He said the organisation was seeking better access to the area to confirm reports of rape, killing and maiming.

"Every day spent by abducted children outside their community is one too many, and the risks of abuse, early marriage and pregnancy increase the more time goes by," Briggs said, urging all parties to prioritise child safety.