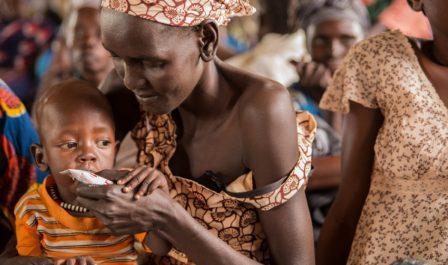 Young girls in southern Africa are selling sex - sometimes for less than the cost of bread - to survive a hunger crisis ensnaring tens of millions, aid agencies said on Thursday.

In Angola, girls of 12 sell themselves for as little as 40 cents to feed their families as the south of the country faces its worst drought in four decades, World Vision said.

World Vision said staff had seen a significant increase in girls resorting to transactional sex in Angola and Zimbabwe amid “huge levels of desperation”.

Robert Bulten, World Vision’s emergencies director in Angola, told the Thomson Reuters Foundation a girl might get 500 kwanzas ($1) for sex - enough to buy about a kilo of beans or two kilos of maize - but could get as little as 200 kwanzas.

“We definitely know there’s an increase. It’s difficult to quantify because it’s taboo ... but I would say a significant number (are doing this),” he said.

Bulten said the price of some staples had doubled since last year. With the next harvest not due until June, he predicted hunger would worsen.

In Zimbabwe, CARE International said there were reports of girls as young as 14 resorting to selling sex, especially en route to South Africa and near goldmines.

“Sometimes they earn as little as 5 RGT ($0.31) for one sexual encounter, which is really awful ... it’s not even enough to buy a loaf,” said CARE’s regional gender expert Everjoy Mahuku.

ActionAid regional advisor Chikondi Chabvuta said women and girls “on the edge of survival” were forced into transactional sex in Mozambique and Malawi.

Swathes of southern Africa have experienced their lowest rainfall since 1981, according to the United Nations, which says the crisis is fuelled by climate change as temperatures in the region rise at about twice the global rate.

Other countries affected include Zambia, Madagascar, Namibia, Lesotho and Eswatini.

Aid workers said many of the girls would normally be in school. In some cases, they had dropped out because of deepening family poverty, but many schools had also closed.

World Vision’s Bulten said the crisis in southern Angola had also increased the incidence of rape and child marriage.

Girls were at heightened risk of rape while walking long distances for water or foraging in forests, he said.

Families struggling to make ends meet may marry girls off early so they have one less mouth to feed, but Bulten said sometimes it was to keep them out of the prostitution.

The International Federation of Red Cross and Red Crescent Societies said the crisis had driven up child marriage in Zimbabwe, Zambia, Lesotho and Namibia.