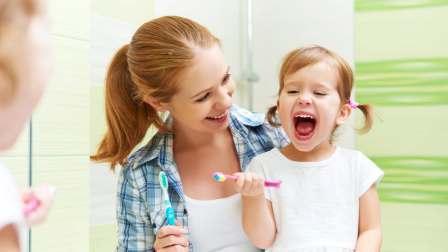 When struggling to put a child to bed on time each night, one of the last things on a parent's mind is the amount of toothpaste smeared across their toothbrush. However, a recent study from the Centers for Disease Control and Prevention suggests that parents and care providers for young children should focus on the amount of fluoride-containing paste that is going into their children’s mouths. Nearly 40 percent of children ages 3 to 6 are using more fluoride-containing toothpaste than recommended by public health officials.

That said, the same CDC report also found that 80 percent of children between the ages of 3 and 15 began brushing after their first birthday -- which is too late, according to the American Dental Association. Many children also only brush once per day, while brushing twice a day is recommended.

Dentists recommend beginning to brush as soon as you see your child’s first tooth and using a pea-sized amount of toothpaste for children ages 3 to 6. A grain-of-rice amount of toothpaste is recommended for younger kids, because children inadvertently swallow small amounts while they are brushing, especially when they are not being carefully supervised.

While toothpaste itself is not harmful to health, excessive ingestion of it’s fluoride has the potential to cause Fluorosis in children. On the mild side Fluorosis can cause white discoloration and on the severe end can mean divots to enamel and a brown corrosive appearance. The damage, which is permanent, may be treated with cosmetic procedures to mask the stains.

There is no risk of discoloration to adults, because, “The chance of development of fluorosis exists through approximate age eight when the teeth are still forming under the gums,” according to the American Dental Association.

So make sure your children are not swallowing too much fluoride while brushing.

Rinsing with tap water has an added benefit.

There is probably fluoride in your tap water, a chemical that has been associated with lowering teeth decay rates. Around 75 percent of community water systems in the U.S. have access to fluoridated water, according to the CDC.

The ADA has endorsed the fluoridation of community water as “safe, beneficial and cost-effective and socially equitable public health measure for preventing dental caries in children and adults.”

To summarize, here are eight facts to remember:

A non-fluoride containing toothpaste can be used in children under age 2 (per CDC recommendations). Fluoride-containing toothpastes (per American Academy of Pediatrics(AAP), American Academy of Pediatric Dentistry (AAPD), and American Dental Association (ADA) can also be used, especially with children who are at high risk for cavities, as long as you are using the proper amount.

Apply a small amount of toothpaste -- the size of a grain of rice -- and press it into the bristles of the toothbrush for kids ages 2 and under.

Use a pea-sized amount of fluoride-containing toothpaste for kids ages 3 to 6.

Monitor and help your child while they brush twice a day.

Make sure your child spits after brushing, and parents should remove any noticeable toothpaste residue left in the mouth.

Store all toothpaste and fluoride-containing products where your child can’t easily reach them.

Finally, each child’s individual needs may be different, so make sure to consult your doctor and dentists at regularly scheduled checkups.