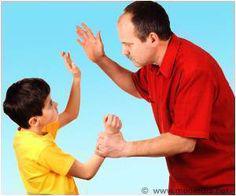 The Committee on the Rights of the Child defines ‘physical’ or ‘corporal’punishment as:

"…any punishment in which physical force is used and intended to cause some degree of pain or discomfort, however light. Most involves hitting (‘smacking’, ‘slapping’, ‘spanking’) children, with the hand or with an implement. But it can also involve, for example, kicking, shaking or throwing children, scratching, pinching, biting, pulling hair or boxing ears, forcing children to stay in uncomfortable positions, burning, scalding or forced ingestion (for example, washing children’s mouths out with soap or forcing them to swallow hot spices)".

For many, the approval, tacit or otherwise, of corporal punishment illustrates the depth of resistance to children’s rights. Sometimes, advocates campaigning on behalf of children, for example in support of the right to be free from sexual abuse, may nonetheless condone ‘smacking’. Yet all corporal punishment of adults or children is a clear violation of human rights. The arguments against the practice are well established.

"laws banning corporal punishment are often not effectively enforced, even in countries such as China where they have been in place for many years. In Cameroon, a 1998 law bans corporal punishment in schools but a study covering four of Cameroon’s provinces, published two years after the ban, found teachers made no secret of using it for ‘cheekiness, disobedience and academic mistakes’ and 97 per cent of students reported that they had been physically punished."

Physical punishment can be arbitrary. Cases have been reported of the use ofcorporal punishment for reasons entirely beyond a child’s control, such as failure of parents to pay school fees, and also for academic failure or to correct misbehaviour (UNVC, 2006: 29). In many situations, it is not easy to disentangle these two motivations. Studies of seven Middle Eastern and North African countries reported that one-third of students said they had been caned because their class or school had not done well on examinations.

For many, the legal prohibition of the corporal punishment of children in all settings, including in the home, is a crucial step on the road towards the realisation of children’s rights. Allowing children to be hit cannot be reconciled with a respect for children’s dignity.

The Global Initiative to End All Corporal Punishment of Children has produced a guide to legal reform. Nonetheless, as suggested above, legal reform is just the start and must be backed up with public campaigning and educational programmes addressing alternatives to physical punishment. The Global Initiative’s website also includes guides on positive discipline and research resources.

The Committee on the Rights of the Child repeatedly admonishes States for allowing the practice of corporal punishment. See it Concluding Observations for France, the United Kingdom and Honduras.