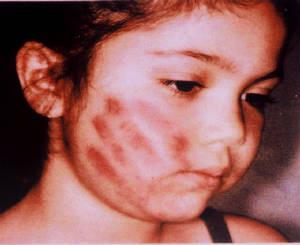 Domestic violence most commonly refers to physical and emotional abuse used by one person in a (romantic) relationship against the other. While most responses to domestic violence are targeted toward adult victims, increasing attention is being paid to the effects of the violence on children. For example, it is increasingly recognised that married girls are at risk of violence from their husbands. According to the UN Study on Violence Against Children (UNVC), a recent survey showed that spousal violence had been experienced in the previous 12 months by four per cent of girls aged 15 to 19 in Cambodia, 15.4 per cent in the Dominican Republic, 21 per cent in Egypt, 25.4 per cent in Haiti, 10.4 per cent in India, 18.2 per cent in Nicaragua, and 33.3 per cent in Zambia.  Younger women and women who married at the earliest ages reported the highest incidence of intimate partner violence.

Girls may be physically forced, or threatened, into having sexual intercourse against their will, or they may have sexual intercourse because they are afraid of what their partner will do if they refuse, or they may be forced to do something sexual that they find degrading or humiliating. In societies where the cultural norm is for men to have unlimited sexual access to women upon marriage, married girls are likely to experience forced and traumatic sexual initiation.

Even where children are not the direct subjects of violence themselves, they are likely to be profoundly affected by domestic violence. According to the United States’ National Clearinghouse on Child Abuse and Neglect Information, childhood problems associated with exposure to domestic violence fall into three main categories:

Long-term problems – Higher levels of adult depression and trauma symptoms and increased tolerance for and use of violence in adult relationships (i.e. domestic violence is a learned behaviour – children who experience it are more likely to reproduce such behaviour in their own relationships).

So, for example, a study in the United Kingdom found that children witnessing domestic violence are more likely to be victims of bullying, while a study of elementary- and middle school-aged children in Italy showed that being bullied at school was associated with witnessing parents’ violence at home, especially for girls.