Newborn sleep: What you need to know 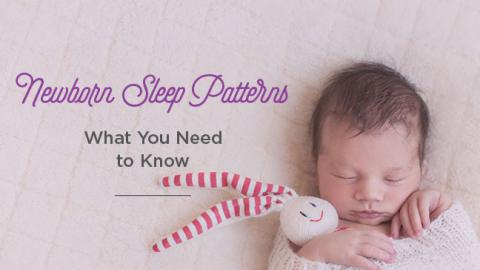 Here are six things to know about newborn sleep that could come in handy during those first couple of months:

1. For the first few days after birth, it’s normal for newborns to be extremely sleepy.

They tend to feed less frequently than in the coming weeks (and therefore may experience a small weight loss during this time). Babies born before their due date usually experience this sleepy phase for a bit longer, while babies born after their due date often don’t experience it at all. After a few days of life, a newborn’s nervous system starts to mature, which results in a more alert and wakeful state. That said, newborns still require a shockingly large amount of sleep—about 16 to 20 hours in a 24-hour period, with each period of sleep varying in length.

2. Newborns shouldn’t be kept awake for more than about an hour at a time.

Yet another reason to banish all the visitors from your living room after an hour or so! Most newborns can only withstand being awake for 45 minutes to one hour before they need to be put back to sleep. If you keep your little one up longer, she’ll become overtired. Her body will produce excess cortisol, and this imbalance will make it difficult for her to settle and fall asleep.

It’s no fun for you (to put it mildly), but it’s totally normal for your newborn to have his days and nights mixed up, and for his sleep to not follow any pattern or rhythm. Night sleep becomes more organized when baby is around six to eight weeks old. There will usually be a longer single sleep period of four to six hours occurring at the beginning of the night.

3. Newborns spend most of their sleep time in active or REM sleep.

This means they don’t reach a very deep stage of sleep, so they wake easily, and they rarely sleep for long stretches.

Research shows that babies who sleep on their stomachs tend to sleep for longer periods, move around less and are less reactive to noise. Sounds good, right? But it’s not. These factors actually put infants at higher risk of Sudden Infant Death Syndrome (SIDS). Light newborn sleep is a protective factor against SIDS.

5. Your newborn does not produce melatonin.

The sleep hormone is responsible for regulating our sleep–wake cycles, but after about a week post-birth, the melatonin your baby was getting in utero disappears. At around six weeks, her pineal gland begins to mature and starts to produce melatonin in very low amounts, ramping up fully around the 12- to 16-week mark.

6. Newborns are ready to learn healthy sleep habits at around six to eight weeks old.

This is the time to establish an earlier bedtime, follow a consistent soothing routine prior to sleep, experiment with allowing your baby to fall asleep on his own and begin placing your baby in the crib for sleep as often as possible.