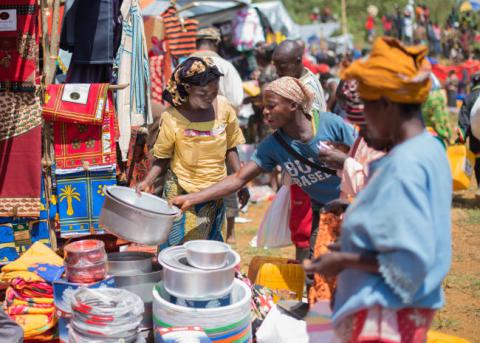 Latest updates about the humanitarian situation in the DRC. Find the political, humanitarian and security highlights and the latest key figures and actions taken by UNICEF and its partners.

Clashes between the Forces Armées de la RDC (FARDC) and armed groups in North Kivu province resulted in the abrupt dismantling of IDP camps, in part due to government information that camps had been infiltrated by armed groups. With the subsequent displacement of up to 35,000 people, UNICEF and other humanitarian actors have been addressing the most urgent needs and advocating that camp closures are conducted in a more coordinated manner, in line with relevant international regulations.

Humanitarian access remains a major concern, particularly in North Kivu as several incidences of kidnapping of humanitarian workers have occurred over the past months.

MONUSCO has officially reported 23 cases of Sexual Exploitation Abuse since the start of the year through 1 May 2016, allegedly involving military elements of the Mission. Nine of the alleged victims are children.

Due to continued flooding, cholera has reemerged, particularly in provinces along the Congo River. The cumulative total this year is 7,136 cases and 119 deaths, 2,000 more cases than reported during the same period in 2016. UNICEF has been supporting the government with supplies to treat 60% of identified cases.

In response to measles outbreaks, UNICEF supported immunization and case management in the affected provinces. A total of 2,386 suspected measles cases, including 40 deaths, have been reported, indicating a high fatality rate (1.7%).

Following a yellow fever outbreak in Angola, DRC has reported 42 cases, the majority from Kongo Central province on the border with Angola; 17 of these cases were confirmed by the Pasteur Institute in Dakar.

Key figures of the humanitarian situation in the DRC

Humanitarian Action for Children in the DRC