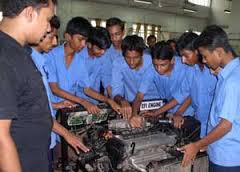 in 2002. Nine out of ten were enrolled at the upper secondary level, typically designed

technical and vocational programmes. However, the enrolment rates vary widely by

regions. In Europe and East Asia, including China, such programmes account for 50 per

cent and 33 per cent, respectively, of upper secondary enrolment. In the other regions,

technical and vocational enrolment is far less common. In Africa and South America,

the share is less than 20 per cent, and in North America and West Asia less than 10 per

cent and 4 per cent, respectively.

In the last decade, secondary enrolments have skyrocketed world-wide. From 1998 to

2002 alone, the number of secondary students grew by 15 per cent. However, this

growth is largely due to increases in general secondary students. As a result, the share

of technical and vocational students has declined since 1998 by 4 percentage points,

from 23 per cent down to 19 per cent. This downward trend is observed in all regions,