Every child has the right to a fair chance in life 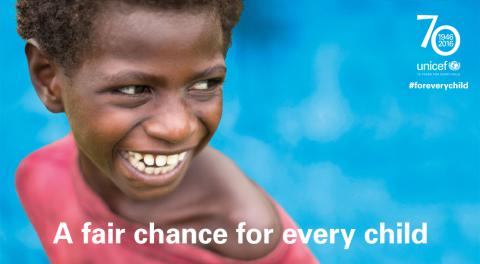 The lives and futures of millions of children are in jeopardy. We have a choice: Invest in the most excluded children now or risk a more divided and unfair world.

Every child has the right to a fair chance in life. But around the world, millions of children are trapped in an intergenerational cycle of disadvantage that endangers their futures – and the future of their societies.

It’s a typical Friday afternoon in the city. Amena has prepared an elaborate family meal of dal, rice, stewed greens, pumpkin, chicken curry and fish – her daughter Hafsa’s favourite. Hafsa doesn’t feel like sitting around with the adults, though; she’d rather go outside and play. So she makes a game of it, hiding under the table to avoid eating her greens. Eventually, Amena gives up; but she makes sure Hafsa drinks all her milk before she is allowed to dash off with the neighborhood kids.
The family of five doesn’t have much. At US$64 a month, rent for their modest two-bedroom flat in the city eats up about a third of the combined income that Hafsa’s father and grandfather bring in. But it’s enough to provide Hafsa with a loving, nurturing environment. The bedroom shared by Amena and her husband doubles as a playroom: Rainbow-coloured tinsel dangles from the ceiling, and a stack of stuffed animals sits neatly in the corner. Amena, who only finished the eighth grade, is trying hard to make sure her daughter grows up in a stimulating environment. Every night before bed, they recite the alphabet in Bangla and English, so that Hafsa can start school on a strong footing.
There is nothing unique or unusual about Hafsa’s situation. She is simply enjoying the basic rights that every child is entitled to: safety, health, play and education.

Around the world, millions of children are denied these rights and deprived of what they need to grow up healthy and strong – because of their place of birth; because of their race, ethnicity or gender; or because they have a disability or live in poverty.

A vicious cycle of disadvantage

In the countryside, Rexona Begum sits down for a lunch of rice and curry potatoes with her daughters Moriom, 6, and Sumiya, 5.
Unlike Amena, Rexona doesn’t have to coax her children to eat. They clear their plates, and when the meal is finished, Moriom dutifully heads over to the moss-covered pond adjacent to their mud home to wash her dish.

Recently, the local clinic diagnosed Sumiya with malnutrition. Rexona didn’t need a doctor to tell her that her daughters aren’t doing well. She can see it in their small frames and their lack of vitality. They don’t look like her neighbours’ children, who, she says, are “healthy and robust”.
Part of the problem is that the family doesn’t have easy access to clean water. The nearest tap is a kilometre away, and until recently it provided only unfiltered water. As a result, Moriom and Sumiya have suffered multiple bouts of diarrhoea, which have compounded the effects of their malnutrition. If Sumiya does not get better, she could become stunted, with long-term, irreversible effects on her physical and cognitive development.
Upon advice from the clinic, Rexona has started to incorporate more vegetables into her cooking, often salvaging the leafy greens her neighbours discard. She has also invested in five chicks, so that her girls can have eggs. But she simply doesn’t have the resources to follow many of the clinic’s nutrition recommendations.
Rexona does her best to provide for her children. When she is not at home caring for them, she works in other people’s houses, mopping the floors or spreading fresh mud on the exterior walls. Still, many basic necessities are beyond her reach. Even with the income her husband and her son bring in as day labourers, she cannot afford to purchase essentials, like meat, fish or eggs.
The poverty that now hampers Rexona’s ability to feed her daughters adequately has been limiting the choices available to her ever since she was a child. Rexona grew up in a poor family and was only able to attend school until Grade 4. Her husband, from an even poorer family, never went to school. He has been working since he was a young boy to help support his family. For all she and her family lack, Rexona says times are better than when she was growing up. “Our life was more difficult. We didn’t have as many opportunities.”

Rexona has modest dreams for her children. “I want my kids to be educated and to be good human beings”, she says. “I’ll help them finish school, if I can.” But she doubts that she and her husband will be able to provide them this basic right. Her 15-year-old son is already a full-time labourer.
Even with three incomes, Rexona and her husband struggle to give their children the basics – a healthy start, strong nutrition and an education. But if her family doesn’t get additional support, her daughters are likely to inherit the deprivations she and her husband grew up with – and in turn pass them on to their own children.

They will become part of a vicious, intergenerational cycle that curtails children’s opportunities, deepens inequality and threatens societies everywhere.

Trapped in a cycle of disadvantage, children from the poorest households, like Sumiya, are effectively pre-selected for heightened risks of disease, hunger, illiteracy and poverty based on factors entirely outside their control. They are nearly two times as likely to die before the age of 5, and in many cases, more than twice as likely to be stunted as children from the richest households. They are also far less likely to complete school, meaning that those who survive this precarious start find little opportunity to break free from their parents’ poverty and to shape their own futures.

Choosing to break the cycle

This vicious cycle is not inevitable. We can choose to change it. There are proven strategies for reaching the hardest to reach and expanding opportunity. When governments adopt policies, programmes and public spending priorities that target the most deprived children, they can help transform those children’s lives and their societies. But when they fail to focus on meeting the needs of the most marginalized, they risk entrenching inequities for generations to come.
Around the world, children make up nearly half of the almost 900 million people living on less than US$1.90 a day. Their families struggle to afford the basic health care and nutrition needed to provide them a strong start. These deprivations leave a lasting imprint; in 2014, nearly 160 million children were stunted.
Despite great progress in school enrolment in many parts of the world, the number of children aged 6 to 11 who are out of school has increased since 2011. About 124 million children and adolescents do not attend school, and 2 out of 5 leave primary school without learning how to read, write or do basic arithmetic, according to 2013 data. This challenge is compounded by the increasingly protracted nature of armed conflict. Nearly 250 million children live in countries and areas affected by armed conflict, and millions more bear the brunt of climate-related disasters and chronic crises.

It doesn’t need to be this way.

By shifting priorities and concentrating greater effort and investment on children who face the greatest challenges, governments and development partners can make sure every child, including those born into poverty like Sumiya, has a fair chance to achieve her full potential – and realize a future of her own making.