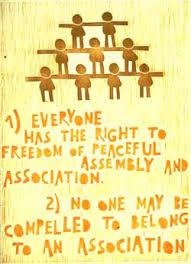 Article 15 of the Convention on the Right of the Child (CRC) and the African Charter on the Rights and Welfare of the Child (article 8) clearly establish children’s right to freedom of association and peaceful assembly.

What can be done?

While most organisations tend to focus on aspects of children’s rights to protection, civil and political rights are often neglected. Children’s advocates, including children themselves, should work to have children’s civil and political rights recognised and respected by governments. A rights-based approach to freedom of association looks at children as citizens who should be able to actively participate in society. It will change the image of children as helpless human beings incapable of making informed decisions.

While in some countries these rights are also restricted for adults, in others, restrictions are imposed only on children simply because of their age. In countries where adults' freedom of association is well established, for example, young people are sometimes barred or inhibited from using public spaces or from forming their own organisations because of their age alone. Read CRIN’s editorial on freedom of association.

The Lebanese law on association prohibits children from participating in, creating, or being members of associations or organisations. The Sustainable Democracy Centre (SDC), a small NGO in Lebanon, started the Citizenship and Peace project in 2008 to create youth clubs.

Even though the law hasn’t changed yet, together with the youth, and in consultation with legal experts, SDC managed to amend its by-laws to accommodate children in the association's decision making process. In January 2012, they officially launched the first Child and Youth Board within an NGO.