in 2030, 167 million children will live in extreme poverty 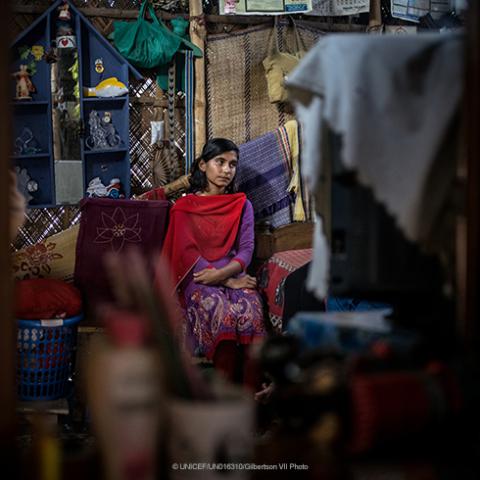 World leaders have committed to ending poverty by 2030. But unless we invest in opportunities for the most vulnerable children, in 2030 167 million children will live in extreme poverty.

Shampa wants to be a banker when she grows up. She’s studying commerce in school, and it’s her strong suit. But she’s worried that she’ll never be able to realize her dream. Less than a year ago, her father, a day labourer and the family’s primary breadwinner, had a debilitating accident that turned her world upside down.

While the family was still reeling from the catastrophe, Shampa went to stay with her aunt, who had a solution. At 15 years old, Shampa would be married.

“Baba and Ma couldn’t afford the expense of my education”, Shampa explains between tears. “So they thought that one less family member would help – it would make things easier.”

Shampa refused to cooperate. Determined to finish her education, she enlisted the support of a local ‘adolescent club’, a group of youth activists who have been organizing for greater government accountability and an end to child marriage. All Shampa had to do was say the word, and the group sprang into action.
A posse of seven teens showed up at the doorstep of her family’s two-room bamboo hut to lecture her parents on the risks of early marriage. They explained that early pregnancy is associated with higher mortality rates for both mother and baby, that Shampa would be forced to spend her days doing household chores and that she would not be able to complete her education. They argued that if Shampa were to finish school, she would be in a better position to earn and support the family in the future. Finally – and this is what Shampa suspects did the trick – they reminded her parents that marriage before 18 is illegal in Bangladesh, and that this law is enforced.

In the end, her aunt’s scheme did not come to pass. Still, the experience rattled Shampa. “Even now”, she says, “when I recall those days, I get scared.”

Shampa’s parents have committed to supporting her through the end of the school year, so that she can attain her secondary school certificate, awarded at the end of Grade 10. But they say they cannot afford to sponsor her studies beyond that point.

Although primary school tuition is free in Bangladesh, making it through the secondary school system requires a slew of unofficial costs. Group tutoring, or ‘coaching’ before or after school, is rampant, and most students consider it essential for success. In addition to textbooks, students rely heavily on supplementary study guides, which the school does not cover. And for the very poorest, attending school comes with the opportunity cost of lost income from work.

Shampa wishes she had the choice to work instead of getting married. “If I were a boy they would not have considered marrying me off…I could have started doing some job and supported my family.” But there aren’t many options for girls: “They can only work as a maid in the house.”
Beyond the expenses associated with secondary school, for many children in remote rural areas, distance from school is an obstacle to attendance. With fewer secondary schools than primary schools, adolescents often have to travel outside their villages and communities to get to school. Some parents prefer not to risk sending their daughters to school, as they worry about harassment during the commute.

Poverty is about more than money

In 2012, almost 900 million people struggled to survive on less than US$1.90 a day – the international extreme poverty line – and more than 3 billion remained vulnerable to poverty, subsisting on less than US$5 a day. Like Shampa, they live on the precipice, just one illness, drought or other misfortune away from descending into extreme poverty.

For children and adolescents, poverty is about more than money. They experience it in the form of deprivations that affect multiple aspects of their lives – including their chances of attending school, being well nourished and having access to health care, safe drinking water and sanitation.

Taken together, these deprivations effectively cut childhood short, robbing millions of children of the very things that define what it is to be a child: play, laughter, growth and learning. These basic opportunities are the foundation upon which children can build their futures – and for those who have a chance to enjoy them, the world can seem full of possibilities. But for a child like Arieful Islam, who is out of school because he needs to work just to pay for his daily meal, even dreaming is beyond reach.

Arieful has never had the chance to consider what he wants to be when he grows up. At just 12 years old, Arieful has been working for longer than he can remember. He started in the fisheries when he was in the first grade, and then later began an ‘apprenticeship’ in the brickworks – unpaid labour that typically comes with a meal. Today, he is a regular labourer at a brick factory where he works alongside much of his family. During the off-season, his mother borrows money from the factory owner just to make it through the rest of the year. The entire family works to pay back the loan the following season.

Arieful, who missed the opportunity to go to school as a young boy, is now enrolled in a second chance education programme that runs in the evening. The programme provides a small stipend, but it’s not enough to compensate for the US$3 a day he earns as a brick worker. During brick season, when work is busy, his attendance is irregular.

Because children experience poverty in multiple ways, simply providing services – such as health care and education – is not enough to provide each a fair chance. Even if education is free, a child like Shampa may not be able to afford the costs of getting to school or buying supplies – or, like Arieful, may not be able to afford to miss out on a day’s work. The most disadvantaged children need the means to access these services.

Social protection programmes like cash transfers are one way to reduce families’ vulnerability to poverty and deprivation and surmount some of the barriers that can keep children from taking advantage of the services available to them. Cash transfers provide a minimum level of income that can help keep the poorest, most vulnerable households out of destitution. They can also provide a ladder out of poverty and open up access to services – like education – that are critical to building children’s futures. By one estimate, social protection initiatives keep some 150 million people out of poverty. Cash transfers can also address some of the factors that keep children from entering school or force them to drop out.

Fourteen-year-old Jhuma Akhter is back in school and performing at the top of her class thanks to a cash transfer programme. Getting here hasn’t been easy.

When Jhuma was just 8 years old, she left school to work as a servant in an abusive home. She spent three years there, and was never paid for her labour or allowed to attend school. She worked in exchange for her upkeep and the promise that, when the time came for her to marry, her employer would pay her dowry.

Eventually, Jhuma’s mother allowed her to return home. But every day after school, Jhuma would head to work, going door to door to beg for rice. One day, as they sat eating their rice on the stoop of their tin-roofed shack, Jhuma explained to her mother that as she advanced from one grade to the next, the costs of school would increase. She would need tutoring, study guides and notebooks not provided by the school. So her mother decided it was no longer worthwhile to send her to school – and instead brought her along to work. Working full time supplying water to local businesses, Jhuma brought in approximately US$7 a month.

That’s when Nazma, a community volunteer, spotted Jhuma. “They were looking for kids like us”, Jhuma explains. Nazma invited Jhuma and her mother to a few meetings to assess the family’s needs and eventually enrolled them in a cash transfer programme conditional upon Jhuma’s attendance at school. Now that her mother receives two annual instalments of approximately US$150, Jhuma has returned to school. She is in Grade 7.

In the neighbourhood, Jhuma is no longer known as the girl who carries water. Instead, she is recognized by her new routine. Every evening after prayers, she hauls a plastic folding table and chair out by the garbage dump at the bend in the road so she can do her homework under the glow of the lamppost. Ever resourceful, she writes her assignments on the back of political campaign posters left over from the most recent election.

Today, when Jhuma imagines the future, marriage is no longer part of the picture. In fact, she thinks girls should wait till they’re at least 22, well beyond the 18 years minimum dictated by the law. Instead, Jhuma now dreams of one day becoming a doctor. “I want to provide care for everybody.”