13 reasons why we need to end violence in schools 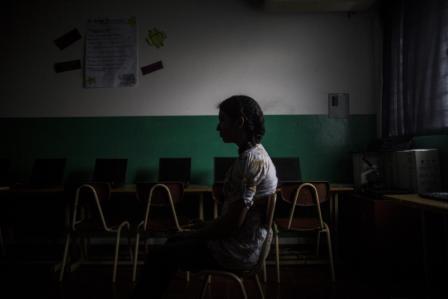 Schools should be a safe space for children to learn and grow. But for half of the world’s teens, this isn’t the case.

Millions of children experience violence, bullying and threats in and around the classroom, which can have lifelong effects on their physical and emotional health.

To protect this and future generations of children, we need to come together to demand change to end violence in schools. Here are 13 reasons why:

Half of world’s teens experience violence in schools. Around 150 million students between the ages of 13 and 15 have reported experiencing peer-to-peer violence in and around school.

Nearly 720 million school-age children live in countries where they are not fully protected by law from corporal punishment in schools. These children are unprotected from physical punishment by teachers and other authority figures.

Globally, more than 1/3 of students aged 13–15 have experienced bullying. Based on available data, bullying is one of the most common types of violence reported in schools.

Children who are already marginalized are especially vulnerable to bullying. Factors that increase a young person’s vulnerability to violence include disability, extreme poverty, ethnicity and sexual orientation or gender identity.

In 39 countries in Europe and North America, 17 million young adolescents admitted to bullying peers at school.

One in three students aged 13–15 is involved in physical fights in schools. Physical attacks by fellow students are most common among boys, while girls are more likely to become victims of psychological or relational forms of bullying.

There have been at least 70 fatal school shootings over the past 27 years.

Cyberbullying allows perpetrators to remain anonymous, but has tangible repercussions. Victims of cyberbullying are more likely than other students to use alcohol and drugs, skip school, get poor grades and have low self-esteem and health problems.

An estimated 158 million children aged 6–17 live in conflict-affected areas where classrooms are often no safer than communities. Children going to school in conflict zones are forced to risk their lives to get an education.

Globally, the cost of violence against children adds up to US$7 trillion a year. This cost undermines investments in health, early childhood development and education.

Violence perpetuates violence. Children who grow up around violence are more likely to re-enact violence as young adults.

Violence in schools is preventable. Students around the world are stepping up to demand the safety and education they deserve. It’s time to follow their lead.